The Life of Siddhartha Gautama, the Buddha 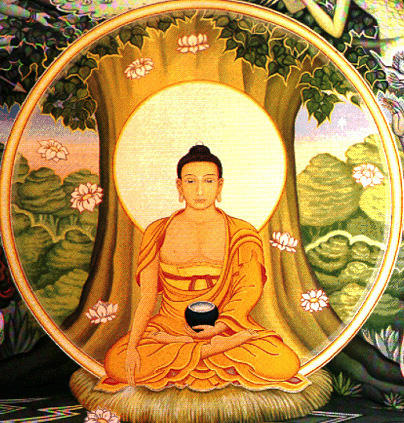 The other major challenge to orthodox Vedism was founded by the son of a chief of a region called the Shakyas. This region lay among the foothills of the Himalayas in the farthest northern regions of the plains of India in Nepal. This founder, Siddhartha Gautama, the Buddha, has many legends and stories that have accreted around his life. While we can't be certain which of these stories and legends are true and which of the thousands of sayings attributed to him were actually said by him, we do know that the basic historical outlines of his life are accurate.

He was the chief's son of a tribal group, the Shakyas, so he was born a Kshatriya around 566 BC. At the age of twenty-nine, he left his family in order to lead an ascetic life. A few years later he reappears with a number of followers; he and his followers devote their lives to "The Middle Way," a lifestyle that is midway between a completely ascetic lifestyle and one that is world-devoted. At some point he gained "enlightenment" and began to preach this new philosophy in the region of Bihar and Uttar Kadesh. His teaching lasted for several decades and he perished at a very old age, somewhere in his eighties. Following his death, only a small group of followers continued in his footsteps. Calling themselves bhikkus , or "disciples," they wandered the countryside in yellow robes (in order to indicate their bhakti , or "devotion" to the master). For almost two hundred years, these followers of Buddha were a small, relatively inconsequential group among an infinite variety of Hindu sects. But when the great Mauryan emperor, Asoka, converted to Buddhism in the third century BC, the young, inconsequential religion spread like wildfire throughout India and beyond. Most significantly, the religion was carried across the Indian Ocean (a short distance, actually) to Sri Lanka. The Buddhists of Sri Lanka maintained the original form of Siddhartha's teachings, or at least, they maintained a form that was most similar to the original. While in the rest of India, and later the world, Buddhism fragmented into a million sects, the original form, called Theravada Buddhism, held its ground in Sri Lanka.

That's all we know about the historical life of Siddhartha, his mission, and the fate of his teachings. When we move into the Buddhist histories, the record becomes much more uncertain, particularly since the events of the Buddha's life vary from sect to sect.

What follows, however, is the most common outline of the nature of Siddhartha's life and philosophy. When Siddhartha Gautama was born, a seer predicted that he would either become a great king or he would save humanity. Fearing that his son would not follow in his footsteps, his father raised Siddhartha in a wealthy and pleasure-filled palace in order to shield his son from any experience of human misery or suffering. This, however, was a futile project, and when Siddhartha saw four sights: a sick man, a poor man, a beggar, and a corpse, he was filled with infinite sorrow for the suffering that humanity has to undergo.

After seeing these four things, Siddhartha then dedicated himself to finding a way to end human suffering. He abandoned his former way of life, including his wife and family, and dedicated himself to a life of extreme asceticism. So harsh was this way of life that he grew thin enough that he could feel his hands if he placed one on the small of his back and the other on his stomach. In this state of wretched concentration, in heroic but futile self-denial, he overheard a teacher speaking of music. If the strings on the instrument are set too tight, then the instrument will not play harmoniously. If the strings are set too loose, the instrument will not produce music. Only the middle way, not too tight and not too loose, will produce harmonious music. This chance conversation changed his life overnight. The goal was not to live a completely worldly life, nor was it to live a life in complete denial of the physical body, but to live in a Middle Way. The way out of suffering was through concentration, and since the mind was connected to the body, denying the body would hamper concentration, just as overindulgence would distract one from concentration.

With this insight, Siddhartha began a program of intense yogic meditation beneath a pipal tree in Benares. At the end of this program, in a single night, Siddhartha came to understand all his previous lives and the entirety of the cycle of birth and rebirth, or samsara, and most importantly, figured out how to end the cycle of infinite sorrow. At this point, Siddhartha became the Buddha, or "Awakened One." Instead, however, of passing out of this cycle himself, he returned to the world of humanity in order to teach his new insights and help free humanity of their suffering.

His first teaching took place at the Deer Park in Benares. It was there that he expounded his "Four Noble Truths," which are the foundation of all Buddhist belief:

2.) All suffering is caused by human desire, particularly the desire that impermanent things be permanent.

3.) Human suffering can be ended by ending human desire.

From a metaphysical standpoint, these Noble Truths make up and derive from a single fundamental Truth (in Sanskrit, Dharma , and in Pali, Dhamma ). The Buddhist Dharma is based on the idea that everything in the universe is causally linked. All things are composite things, that is, they are composed of several elements. Because all things are composite, they are all transitory, for the elements come together and then fall apart. It is this transience that causes human beings to sorrow and to suffer. We live in a body, which is a composite thing, but that body decays, sickens, and eventually dies, though we wish it to do otherwise. Since everything is transient, that means that there can be no eternal soul either in the self or in the universe. This, then, is the eternal truth of the world: everything is transitory, sorrowful, and soulless–the three-fold character of the world.

As pessimistic as this sounds, the philosophy of Siddhartha Gautama is a kind of therapy. In fact, classifying it in Western terms is impossible. We think of Buddhism as a religion, which it unquestionably became, but Siddhartha was less concerned with theology or ritual or prayer as he was with providing a tool for individuals to use to escape suffering. The goal of this method, the Eightfold Noble Path, is the elimination of one's desires and one's attachment to one's self. Once one has understood correctly the nature of the universe (Right Understanding) and devoted one's life to selfless and altruistic actions (Right Action) and, finally, by losing all sense of one's self and by losing all one's desires, one then passes into a state called Nirvana (in Pali, Nibbana ). The word means "snuffed out" in the way a fire is snuffed out or extinguished. At this point, the self no longer exists. It is not folded into a higher reality nor is it transported to a land of bliss, it simply ceases to exist. This is the state that the Buddha passed into at his death.

Like Jainism, then, Buddhism centrally concerns the problem of the eternal birth and rebirth of the human soul. Unlike Jainism, Buddhism in its original form does not posit some transcendent alternative as a goal. In fact, Buddhism in its original form held that the soul actually died when the body died. How, then, could a soul pass from body to body? What passed from body to body was a chain of causes set in motion by each soul; the Buddhist philosopher Nagsena said it was like a flame passing from candle to candle. The individual, in snuffing out the self, brings those chain of causes to an end.

A large part of the program prescribed by Buddha involved selflessness in the world. Buddhism represents one of the most humane and advanced moral systems in the ancient world. The first steps on the road to Nirvana were to focus one's actions on doing good to others. In this way one could lose the illusion that one is a unique self. The Buddhist scriptures disapprove of violence, meat-eating, animal sacrifice, and war. Buddha enjoined on his followers four moral imperatives: friendliness, compassion, joy, and equanimity, the "Four Cardinal Virtues."

This is the philosophy that Buddha left the world. In the years following his death, the teachings began to slowly develop into various sects. Buddhism became so fragmented that barely one hundred years after the death of Siddhartha, a council of Buddhists was called to straighten out the differences. The earliest forms of Buddhism, which are now only practiced by a small minority, are called Theravada, or "The Teachings of the Elders."

This email address is being protected from spambots. You need JavaScript enabled to view it.