Comments on the Chenrezig Sadhana 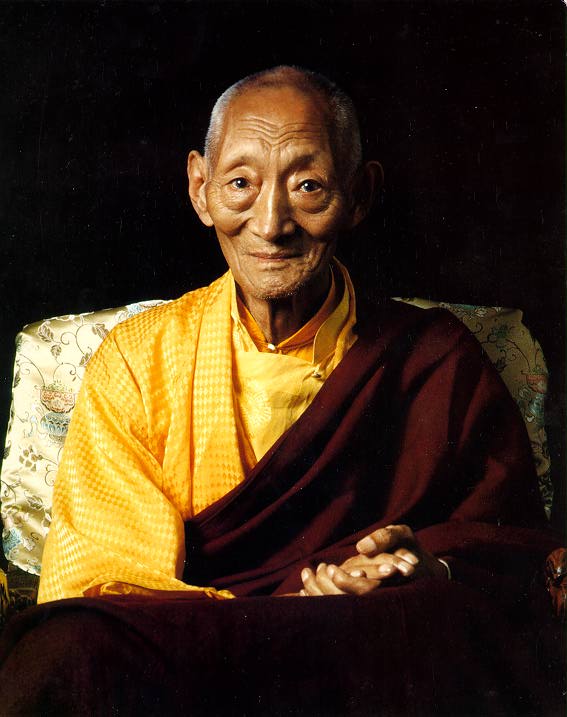 IN HIS GREAT COMPASSION THE BUDDHA,

also emanated as Chenrezig, a form of the bodhisattva Avalokiteshvara.

Practices such as the Chenrezig and Tara sadhanas can be approached

by someone leading an ordinary life, and the Chenrezig meditation is uncommon

both in the ease of its performance and the blessing that it bestows.

It too is development stage practice, and regardless of which yidam is practiced,

this practice is important because in it we work with our attachment to "I" or "I am."

As long as we have the idea "I am my body," we cannot obtain Buddhahood.

The Vajrayana teaches precise and skillful methods to transcend or abandon this clinging,

and all of these involve changing one's attachment to physical existence. 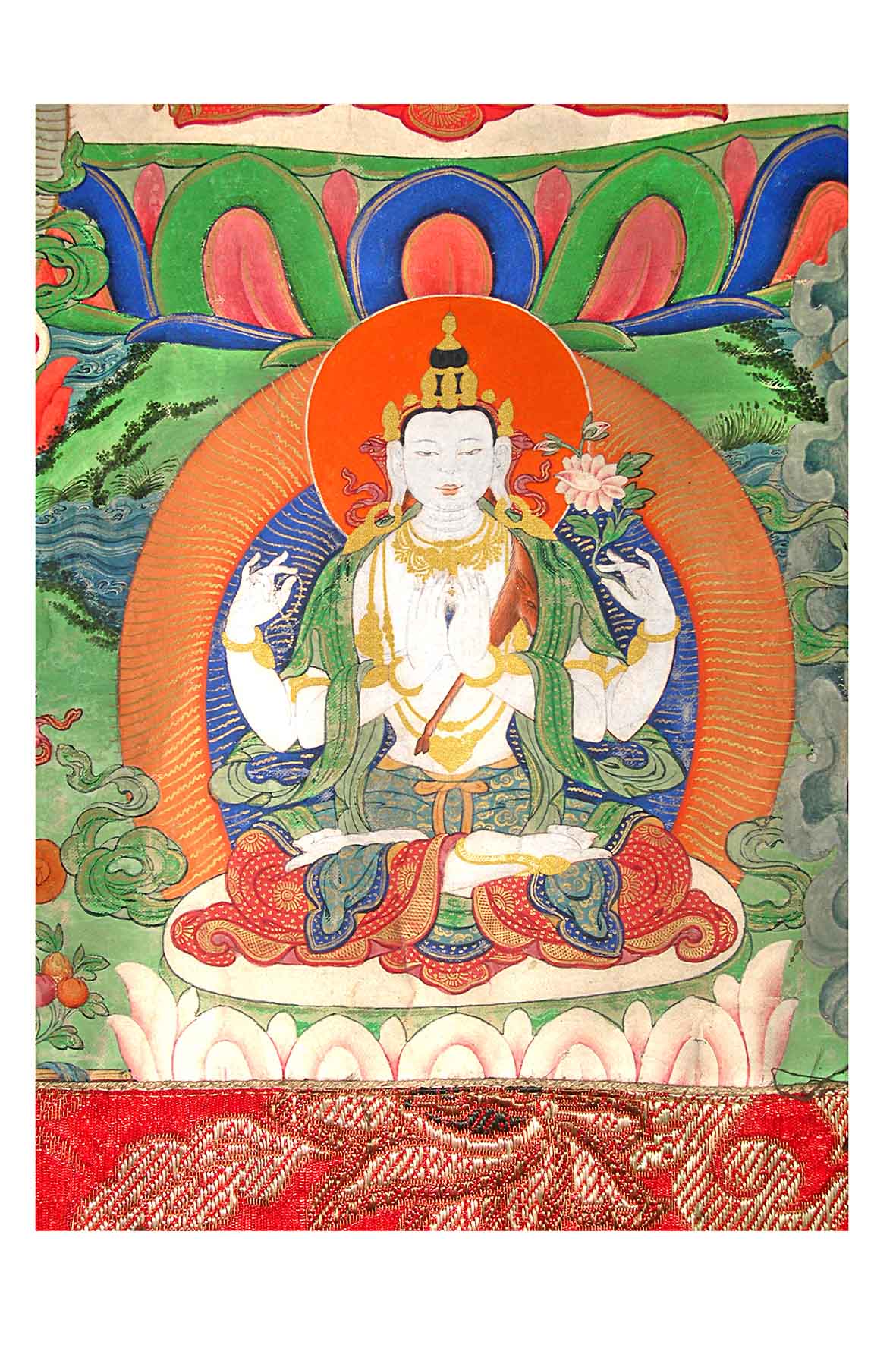 Instead of conceiving of oneself in an ordinary body, one visualizes oneself as Chenrezig. For example, one thinks, "I am Chenrezig, my form is that of Chenrezig."

However, one does not think of the deity's body as solid or material, made of flesh and blood like one's ordinary body, or made of metal or stone like an idol.

One thinks of it as appearance that is inseparable from emptiness, like a rainbow or like a reflection in a mirror.

Although the visualization of oneself as Chenrezig is a mental attitude, it has been said that one's attitude can change phenomena.

This means that if one maintains, over a period of time, the conviction that one is the deity, one will eventually become the deity.

There is a story to illustrate this. Near the town of Madras in India were many forests, and within them were small villages where many families lived. In one village the children always played near the house of an old woman who lived all by herself. Whenever she came outside, the children taunted her and threw stones at her. She became very depressed about this, and angry as well, until one day she remembered hearing that one can change phenomena by means of one's attitude. She thought of all the tigers in the forest, animals known to eat people. So the old woman began to think, "I am a tiger, I am a tiger," and after a while she actually became a tiger. The children were terrified and their families moved from the village to somewhere else.

If such a transformation into a worldly form is possible, then transformation into the form of Chenrezig is even easier, because the yidam exists as a yeshe sempa, which means wisdom being. With faith, aspiration, and the proper attitude--with meditation on one hand and actual compassion on the other--transformation can actually occur. Because of this, it is possible to obtain liberation in one lifetime if one's practice is strong enough.

Since the practice of Chenrezig is so easy, it is regularly done at Karma Triyana Dharmachakra and at all Karma Thegsum Choling centers, and there is great blessing in many people chanting together. But it can be done on one's own as well, and one can recite the mantra OM MANI PEME HUNG at any time one wishes--while walking around, while eating, while working, any time at all. Anyone can learn about the mantra and the Chenrezig meditation by requesting lamas such as Khenpo Karthar Rinpoche to explain it.

The practice of tranquillity meditation, or shamatha, is common to the teaching of both the sutras and the tantras, and it can also be performed within tantric practice. During the Chenrezig meditation, one can direct one's awareness to the body of the deity, or to the syllable HRI visualized in the heart of the deity, or simply to the sound of the mantra as one recites it. Any of these, especially the latter, will give rise to extraordinary tranquillity.

Insight or vipasyana meditation can also be combined with Vajrayana practice. If one recognizes that it is the mind that creates the body of the deity, and that the mind is empty--and if one comes to actually experience the inseparability of these things--then an insight develops that becomes the essence of prajnaparamita, the perfection of wisdom.

If one wishes to gather the accumulations of merit and awareness, one can do so by visualizing the syllable HRI in the heart of the deity, surrounded by the deity's mantra. Think that countless rays of light emanate from these syllables, and they shine in the ten directions, which are the four cardinal points, the four points between them, and the two points above and below. On the end of each ray of light are beautiful offerings that please the five senses--forms, sounds, smells, tastes, and tactile sensations. One offers these to all the Buddhas and their sons, who return them as blessings in the form of rays of light that dissolve into one's heart. It is said that there is no more profound means than this for accumulating merit.

One can also visualize the syllables in one's own heart, with rays of light emanating to the ten directions to touch all sentient beings, transforming their bodies into the body of the deity and purifying their obscurations. One visualizes that all sentient beings, who have become like Chenrezig, are reciting the mantra OM MANI PEME HUNG, and the entire universe hums with its sound. It is said that there is no more effective means than this for purifying obscurations.

Finally one visualizes that the entire universe and all sentient beings in it are in the form of Chenrezig, which melts into light and dissolves into oneself. One's own body, as Chenrezig, then melts into light and dissolves into the syllable HRI in one's heart. The HRI dissolves upward and finally disappears into emptiness. Remaining in this meditation is said to be the most profound way to realize emptiness and Mahamudra, and this is the practice of the fulfillment stage itself.

The development and fulfillment stage practices of Chenrezig are easy to do, easy to understand, and easily explained, and no matter how long one practices it, its benefit will continue to grow. If in the future one should do a three-year retreat, then meditation upon other yidams will be all the easier because of one's experience with the methods and visualizations of Chenrezig.

In America we make a great deal out of highways, and we depend on them to get where we are going. We need to understand, therefore, that the development and fulfillment stages of tantric practice are the highway that all the siddhas of the precious Kagyu have traveled to reach enlightenment and full Buddhahood, with incalculable benefits for sentient beings. It is only fitting that we travel the same highway.

Taken from a teaching given by Very Ven. Kalu Rinpoche titled "Following in the Footsteps of the Great Kagyu Forefathers," given at Karma Triyana Dharmachakra on the weekend of October 24, 1986.

© It was translated by LamaYeshe Gyamtso and edited by Sally Clay.