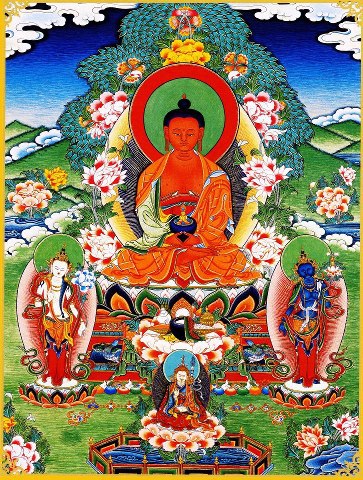 Pure Land practice traces its existence back to Buddha Shakyamuni , who founded what is now known as Buddhism in India more than 2,500 years ago.

In many of his teachings, the Buddha spoke of another Buddha named Amitabha, who lived on earth countless aeons ago.

Before Amitabha Buddha attained Buddhahood, he was known as the King Dharmakara. This King promised that upon attaining enlightenment, he would create a delightful and wonderful realm called the "Western Pure Land of Ultimate Bliss."

In this pure land, the inhabitants are freed from the cycle of birth and death so they can focus single-mindedly on attaining enlightenment. In our realm, it is difficult to practice. Therefore the Buddha Amitabha vowed to create a world in which we could be reborn into, and this world of bliss would be conductive to attaining enlightenment. King Dharmakara pledged that once he became a Buddha, he would guarantee that anyone who one-pointedly recited his name (with a sincere desire to be reborn in the Pure Land) would indeed be reborn in his presence. When Dharmakara attained Buddhahood, he fulfilled this vow.

Amitabha Buddha's Western Pure Land is a realm of enlightened, unworldly bliss. Its inhabitants enjoy not only their beautiful surroundings, but also the company of countless Buddhas and Bodhisattvas as they advance toward their inevitable enlightenment. In the Pure Land, the journey toward enlightenment is smooth and easy because there is none of the suffering, defilement, or delusion that so often blocks spiritual progress.

There is no illness, old age, or death in the Pure Land. There is no danger of being reborn on earth or in any other realm where death occurs. The Pure Land is not an eternal abode or a heaven. Rather, it is a way-place where inhabitants dwell in unimaginably wonderful surroundings as they progress toward complete enlightenment.

Bodhisattvas are beings who have attained almost complete enlightenment. They often have vow not to accept full Buddhahood until all other sentient beings have been enlightened.

Two great Bodhisattvas are especially important in Pure Land practice. They are the Great Strength Bodhisattva and The Bodhisattvas of Great Compassion. Hosts of Buddhas and Bodhisattvas either dwell in the Pure Land or visit there regularly to guide practitioners in attaining enlightenment.

The most common Pure Land practice is Buddha recitation, or the recitation of the name of Amitabha. In numerous Buddhist lineages, chanting the name or mantra of an enlightened being is of great benefit and merit. It also is a very efficient meditation method.

Many Pure Land Masters throughout the centuries have attained enlightenment by simply chanting the Buddha Amitabha’s name. In certain cases, they attained high levels of realizations.

Amitabha's name can be recited in many different ways: silently or aloud, alone or in a group, with or without chanting beads, and with or without musical accompaniment. But one should always chant the name of Buddha single-mindedly, sincerely wishing to be reborn to the Pure Land.

Other Pure Land practices include contemplating the qualities of Amitabha, visualizing Amitabha, and reciting Sutras.

One important feature of Pure Land Study is its acknowledgment that attaining rebirth in the Pure Land is the major step forward on the ultimate journey toward eventual enlightenment. The Buddha-name recitation technique used in Pure Land Study is so simple and straightforward that any Pure Land student -- "ten thousand in ten thousand" -- can use it to attain rebirth in the Pure Land, freedom from the cycle of birth and death, and eventual enlightenment, providing, of course, that the student also cultivates his or her Buddha-nature.

The immediate goal of Buddha recitation is to forge the karmic connection that will bring one to be reborn in the Pure Land, but the actual goal is to become enlightened. By reciting the Buddha name, bad karma is eliminated and merit is accumulated.

In order to be reborn in the Pure Land, one must be moral. One must pay respect to one’s parents and gurus. Also, one should not deliberately kill living creatures, steal, engage in sexual misconduct or use deceitful or harmful speech. As a practitioner, one should understand reality and not blindly believe in the teachings either, instead, one should gain confidence by true devotion and investigation. One should take refuge, uphold the Bodhisattva ideal and vow to attain Buddhahood for the benefit of all sentient beings.

Faith, vows and practice are the three crucial points to be followed.

Even though one is reborn in the pure land, and attains enlightenment there, one is still upholding the bodhisattva ideal. Even without leaving the state of Amitabha's pure land, the buddhas and bodhisattvas can still benefit sentient beings through enlightened activity and by manifesting on earth. Therefore, the practitioner (by being reborn in the pure land) should not turn their back on the Mahayana and their goal to benefit all beings once enlightened.

The school of Buddha recitation was established by Hui-yuan (344-416) in China, although previously it was incorporated as an optional practice in other schools. More recently masters such as Ven. Yin Kuang (1861-1940) were crucial in further institutionalized the school. The practice of reciting Amitabha’s name was brought to Japan by the Master Honen (1133-1212).

In Tibet, special practices such the transference of the mind to Amitabha's pure land (phowa) were often done by the Lamas and others. These teachings, usually only taught in retreat, were transmitted from the Indian Masters to Marpa Lotsawa and Khyunpo Naljor of Tibet. 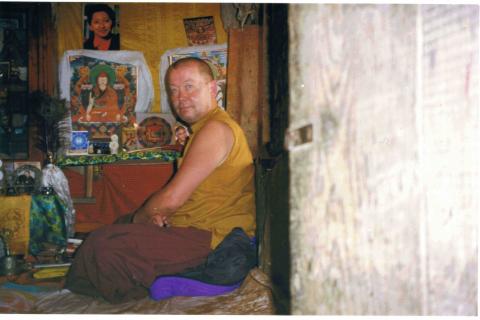