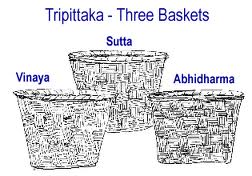 The Tripitaka (called Tipitaka in Pali) is the earliest collection of buddhist writings. Initially, they were composed orally, but were written down by the third century bce. The word means "the three baskets," (tri=three, pitaka=baskets), and refers to the way the texts were first recorded. The early writing material was long, narrow leaves, which were sewn together on one side. Bunches of these were then stored in baskets. This is a large collection, running 45 volumes in one modern edition.

The baskets are divided by subject matter. The first basket is the Discipline Basket (Vinaya Pitaka), which set out the rules and guidelines for living the monastic life of the sangha. It focuses first on the 227 regulations for monks (Bhikkhus), which concern everything from basic morality to robe-making, the additional rules for the nuns (Bhikkhunis), and then on guidelines for interaction between the monks and nuns and the laity. The second basket is the Discourse Basket (Sutra Pitaka) and it contains records of the Buddha's teachings and sermons. These discourses of the Buddha present matters of theology and moral behavior for all buddhists. The third basket is that of the Special Teachings (Abhidharma Pitaka). It essentially is a miscellaneous collection of short writings containing everything from songs and poetry to stories of the Buddha and his previous lives. One text, the Dharmapada, contains simple discussions of key buddhist concepts based on the Buddha's daily life. To read parts of the Dharmapada, go here. (I recommend reading the section on the "The Monk," "Craving," or "The Enlightened One.")

The Tripitaka is the sole canonical text in Theravada Buddhism. It has been interpreted throughout the centuries, however, by numerous commentaries. For a discussion of the Tripitaka in Theravada and some examples of the texts, browse here. (This site contains extensive details about the Tripitaka, many of which are interesting but not necessarily needed at an introductory level.)

While Mahayana Buddhism reveres the Tripitaka as a holy text, they add to it a total of 2184 sacred writings. Most of these writings go under the name of Sutra. The Sutras were put into writing between the second century bce and the second century ce, during the time the split between Theravada and Mahayana developed. Since there are so many new works, different divisions of Mahayana develop in different directions depending on which Sutras they use and emphasize. Just a few, however, are key to much of Mahayana development and thought.

The most important Sutra is the Lotus Sutra. It depicts a sermon by the Buddha to the assembled Bodhisattvas, buddhas and other beings in which he teaches the basis of Mahayana Buddhism. He emphasizes the goal of becoming a Bodhisattva, the notion of realizing one's own buddha-nature, and so on. The Lotus Sutra is used extensively in many forms of Mahayana and Vajrayana Buddhism, and is even the primary text for one strand of Mahayana, Nicheren Buddhism. (You can dip into a chapter of the Lotus Sutra by going here. Or, you can visit a site dedicated to Nicheren here.)

The Heart Sutra also plays an important role in Buddhism. It is short, only a page or two long, but it sets out the character of nirvana, Emptiness, and Ultimate Reality as perceived within Mahayana. In it, the Bodhisattva Avalokiteshvara describes the nature of the five skandhas: body (=form), feelings, senses, tendencies, and consciousness. It is often chanted and discussed, especially in Vajrayana. To read the Heart Sutra, go here or here.

A Sutra called "Land of Bliss" describes the Pure Land of Amitabha Buddha. It relates the vow of the buddha that enabled him to create the Land, and discussed what people must do to enter the Pure Land.

The Sutras of the Perfection of Wisdom (Prajna-paramita) provides the basis for Mahayana's understanding of the key notion of "Emptiness." Nagarjuna used this text as a basis for his thought and writings. The Heart Sutra is part of this larger text.

Nagarjuna was an early buddhist thinker whose importance is often overlooked. He was the first writer to systematize key concepts of Buddhism. Although he founded a Mahayana school, the Madhyamika ("Middle Way"), his importance comes from his thought. In his Memorial Verses on the Middle Way, Nagarjuna interprets the Sutra of the Perfection of Wisdom. His central argument elaborates the concepts of Emptiness and impermanence. He shows that each "thing" exists only relation to other "things." Since each thing changes, its relationship to other things changes. These changes reveal that nothing stays the same, nothing is permanent or fixed. Whereas Theravada believed this as the nature of human beings, Nagarjuna made it clear that this applied to all the cosmos. Thus nothing in the cosmos was fixed or permanent other than the existence of the cosmos itself. The metphorical term he used to describe this notion was "Emptiness" or "Void." For a sample of Nagarjuna's comments on "faith," go here; for other citations of Nagarjuna, go here.

The Texts of Vajrayana Buddhism

Vajrayana draws upon the literature of the other forms of Buddhism. It reveres the Tripitaka, which was perhaps the first buddhist text to be translated into Tibetan. It also draws extensively upon the Mahayana Sutras, especially those concerning Wisdom, as well as the writings of Nagarjuna and his followers. In addition, Vajrayana uses a number of Tantric texts, as well as commentaries on all of them. The Tibetan monks also wrote many works of their own. Two texts are fairly well known in the West. The first is the Great Stages of Enlightenment, by Tsongkhapa, which deals with the importance of ethical behavior and control of the mind as prerequisites to engaging in tantric practice. The second is the Tibetan Book of the Dead. It sets out the stages a person goes through while dying, at death, while dead, and then as they are being prepared for rebirth and then finally rebirth itself. During each of these stages, appropriate texts are read to the deceased. If the deceased hears these and understands their true meaning, then they can achieve nirvana without being reborn.