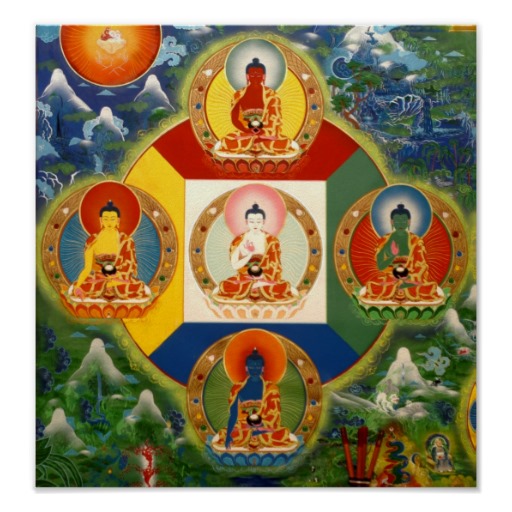 Buddhas are fully enlightened beings who have transcended the limits of this realm of suffering.

They manifest for the benefit of all beings.

known as Siddhartha Guatama or the historical Buddha of this eon,

lived over twenty five centuries ago. 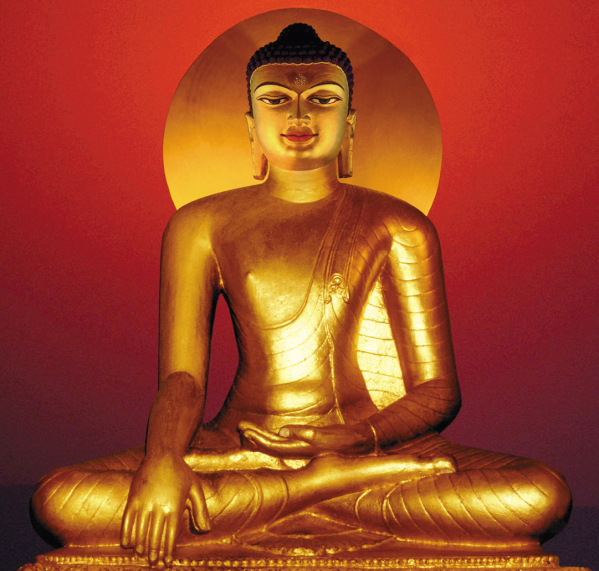 He is often represented in various positions, each depicting a stage in his life.

and his right hand touching the earth,

reenacting his defeat of Mara (the evil one) and taking the earth as witness.

Included on this page are the Five Buddha Families,

and then some Buddhas who are highly revered across the Buddhist world.

The Five Buddhas are generally representative of all the Buddhas,

each symbolizing a particular quality of enlightened activity.

He represents the First Teachings, the Avatamsaka Sutra, given esoterically by the Buddha but hidden by the Nagas (dragon serpents).

He is shown with the dharma wheel, is white in color and placed in the center of Mandalas.

His throne is supported by either lions or dragons. Vairochana’s element is ether and OM is his sacred syllable.

The image here shows the Sarvavid Vairochana with four faces.

Vajradhavisvari is the consort of Vairochana,

white in color, and her implements can be the wish fulfilling gem and a triangle. 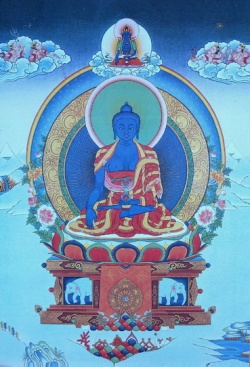 He resides in the Eastern direction and is blue in color.

His throne is supported by elephants.

He often holds a vajra while taking earth as witness.

He is the subjugator of mara and represents the undisturbed path to enlightenment.

His element is water and HUM is his sacred syllable.

Locana is the consort of Akshobhya, grey in color, and her implements are Vajras.

He resides in the Southern Direction and is yellow in color.

He is often holding a wish fulfilling gem and a bell.

His throne is supported by horses or lions.

His element is earth and TRAM is his sacred syllable.

Mamaki is the consort of Ratnasambhava, light yellow in color,

and her implements are peacock feathers (representing the transformation of toxins). 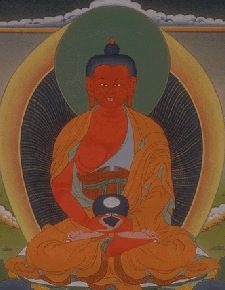 He resides in the Western Direction and is dark red in color.

His throne is supported by peacocks.

His hands are in meditative equipoise, with a begging bowl.

His element is fire and HRI is his sacred syllable.

Amitabha's hands can form a whole range of mudras,

each depicting a different stage of rebirth in his pureland of Dewachen (Sukhavati).

Other popular images of Amitabha are of him descending down to greet the deceased,

or accompanied by his retinue of Bodhisattvas in Dewachen.

Pandara is the consort of Amitabha, pink in color,

and her implements are blue lotus flowers.

The Buddha Amitabha is venerated, along side of the Buddha Shakyamuni and the Medicine Buddha,

the most within the Buddhist world.

The Sutras specifically single out Amitabha as a compassionate being who,

previous to becoming enlightened, made great vows to lead all living beings to happiness.

His most famous vow was the wish for any being (who sincerely recites his name) to be reborn in his pure realm of Dewachen.

There one can quickly progress in dharma practice and attain enlightenment.

He resides in the Northern Direction and is green in color.

His throne is supported by Garuda.

His element is air and AH is his sacred syllable.

light green in color and her implements are double-crossed vajras.

He is depicted with a blue color and without any clothing.

This represents that he has shaken off all worldly bonds.

He is usually in union with his consort Samantabhadri, who is white in color.

These are two separate enlightened figures within the Buddhist tradition.

Along with Vajradhara, he is considered like the Dharmakaya or Supreme body of the Buddha

(the actual mind of the Buddha which is beyond concepts and actual form).

His blue color represents the vastness of the Dharmakaya,

his ornaments represent the Sambhogakaya,

and his human form represents the Nirmanakaya.

Vajradhara is not a historical figure but instead the essence of the Buddha’s various forms.

In this image he is shown with consort but he is not always in union with a consort.

The Buddha of Medicine resides in the East and is blue in color.

He is holds a begging bowl and a medicinal plant,

although sometimes he is depicted with a wish fulfilling jewel.

Before he became enlightened,

this Buddha made Twelve Great Vows aspiring to benefit all beings.

He is highly venerated in Tibet, China and Japan.

He is light red in color.

He holds a vase of longlife nectar and his hands are in meditative equipoise.

His body is adorned with ornaments.

Amitayus is the Sambhogakaya form of Amitabha and he is the Buddha of Infinite Life.

The lineage of his practice, which centers around longevity,

Amitayus, White Tara and Namgyalma are the three deities of long life.

Guru Padmasambhava, who arrived in Tibet in the 9th Century, is considered an incarnation of Amitayus.

He holds a bell and a Vajra.

He is white in color with ornaments and jewels.

Vajrasattva is used in purification practices.

Vajrasattva is the head of the Mandala.