Song of Advice for Giving Up the Eating of Meat 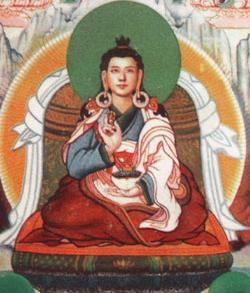 When I think about the suffering that meat-eating brings,

I can not bear it and I feel pain and anguish in my heart.

Out of emptiness and compassion, you are the one who guides beings,

Noble Avalokiteshvara, to you I pay homage.

Without having trained in love and compassion myself,

I ate the flesh of my mothers whilst lecturing about cause and effect.

Without realizing the absolute, I wandered on the path of empty words.

I, the parrot-like beggar of White Rock,

Practised austerities and ‘extracting the essence.’

Then, one day, while meditating on Lord Avalokiteshvara,

According to the union of stages from the Khanyam Rangdrol,[1]

My own body and everything around me suddenly disappeared,

Transforming into the light body of the Great Compassionate One,

Who appeared as a vision in the sky before me.

As I looked from a state of luminous self-awareness,

I saw the inconceivable miseries of the lower realms.

And in particular, the vast suffering of the Reviving Hell.

One of its quarters in particular I saw was completely filled

With men and women, naked and helpless, and before each one

Many of them held sharp weapons in their hands,

With which they cut apart their victims and ate their flesh.

The victims did not die until their karma was exhausted,

And their habitual tendencies did not diminish, but only increased.

For those who perform ‘red offerings’ it was even worse.

All of them let out loud screams of pain and agony.

When I had seen all this external manifestation of my own perception,

I thought to myself, “What could be done to stop this suffering?”

And in that very instant, in the sky before me,

There appeared the Great Compassionate One, who said: 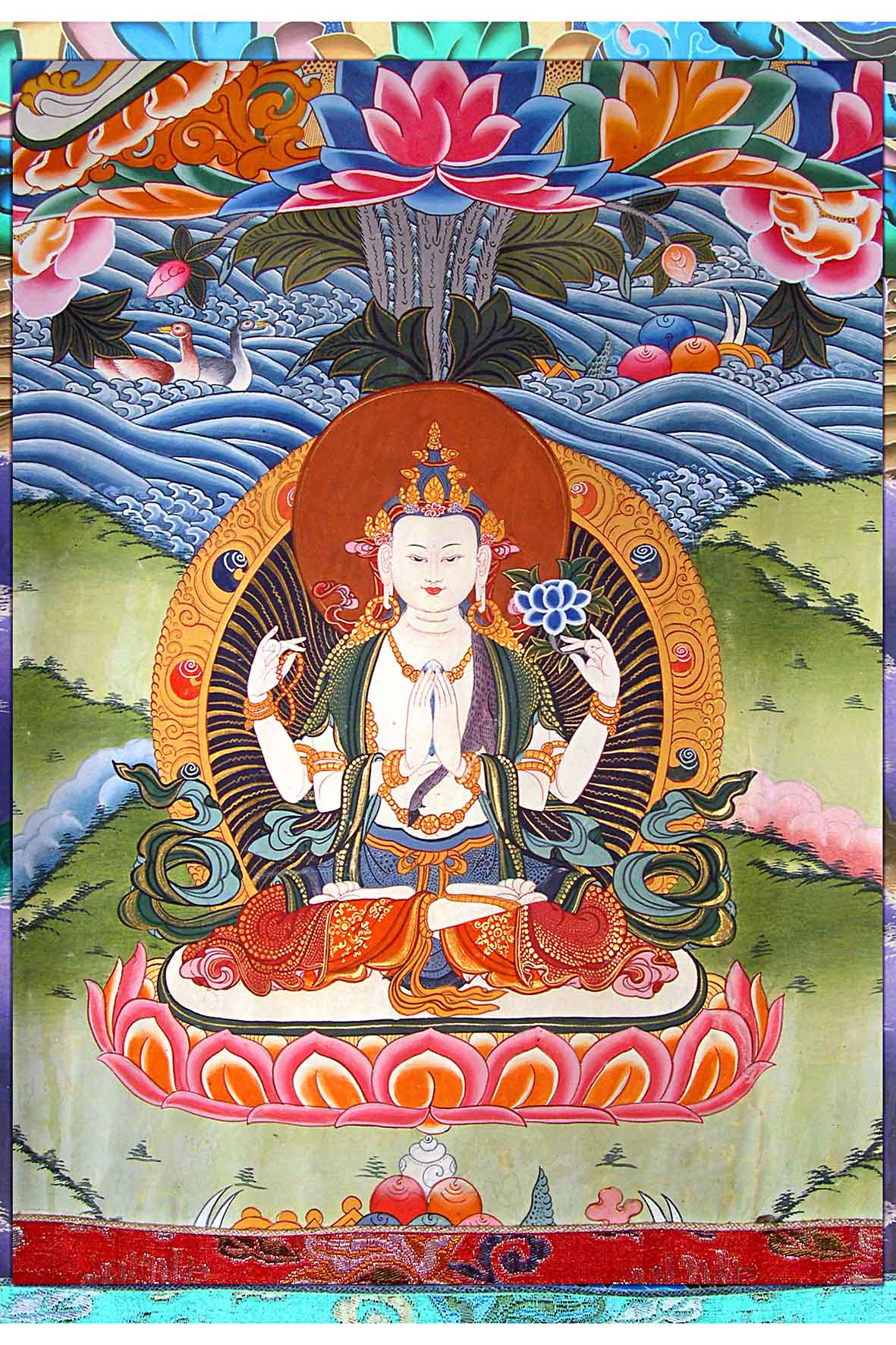 “Ema! My son, you have been close to me for many lives,

Now listen well, you who are diligent and determined!

You have heard teachings on the generation stage of deity yoga,

And have even developed a few qualities,

But the root of the Dharma lies in loving kindness and compassion.

Do you have real love and compassion within you?

How could someone who’d trained in compassion ever eat meat?

Just look at the way meat-eating brings such suffering!

The results of our own actions will ripen on us alone,

And there is nothing the buddhas of the three times can do.

Eating meat is bereft of any virtue and entails many faults,

It is the source of four hundred forms of disease,

Except when it is part of the fearless conduct of one who benefits all he encounters,

Used as a medicine or a sacred substance of the supreme secret mantra,

The consumption of flesh brings not the tiniest drop of virtue.

Since eaters of flesh are either maras or rakshasa demons,

Your discipline will only degenerate and negative emotions increase,

You will lack the cause, which is altruistic love and compassion,

And therefore find it hard to gain the fruit, the essence of awakening.

Meat eaters will not be accompanied by the wisdom deities,

They will be without blessings, siddhis, auspiciousness and activity.

The substance of altruism will not develop in eaters of flesh,

And gods and nagas will probably see them as demons.

Meat eaters will be surrounded by gandharvas, rakshasas, maras,

As its result, eating meat will lead to rebirth in the hells,

Or as a bird, a jackal or a cannibal demon.

But when you renounce it, you will be free from all these faults,

And always be revered by non-human beings,

Who will see you as a pure brahmin or a god.

All the buddhas and bodhisattvas of the ten directions,

Gurus, yidam deities and dakinis will gather around you like clouds,

And you will be accompanied by male and female bodhisattvas in particular.

Quite naturally, you will possess the cause of loving kindness and compassion,

And swiftly reach the result which is the essence of awakening.

These are just some of the inconceivable virtues to be gained.”

This he spoke and then, once my own perceptions were back again,

I felt as if I had awoken from a lucid dream.

My mind and body were in such pain I might have swallowed poison,

And I felt such fear and panic that it made me shiver.

Just thinking about the terrible sufferings of the Reviving Hell,

I could only give away my happiness in exchange for others’ pain.

My mind was so completely overwhelmed that I could only weep.

And I felt an intense, unbearable compassion.

Then in order to take upon myself the sufferings of others,

And to purify their faults and obscurations caused by eating meat,

For every mother sentient being, as infinite in number as space is vast,

I made the following vow, true according to the two levels of reality:

“Aho! Mighty sage Shakyamuni and all the buddhas and bodhisattvas throughout the whole of space and time,

Gracious root and lineage masters, care for me,

Overwhelmed by ignorance and the two obscurations,

I spoke often of how all infinite beings have been our parents,

And while living off their flesh, I told others about cause and effect.

I had no idea that the suffering involved was so great.

Is sanctioned by the Buddha and is not a negative action.

But those who say this must be saints who benefit all they encounter,

And practitioners of the profound path of secret mantra.

As for me, I have no instruction more profound

Than altruistic love and compassion,

As well as the infallibility of cause and effect.

In all sentient beings who extend throughout the whole of space,

From this moment on, I completely renounce the eating of flesh.

This will be my unfailing commitment, and I shall never let it slip.

Even if all the animals on earth were eaten,

There would still be no real satisfaction, hunger would only increase.

And if we don’t find anything to eat or drink for just a few days,

We feel as though we’ve never tasted even a morsel of food before.

Now is the time to escape this demon hunger.

Where does this flesh come from anyway?

It comes only from ego-clinging and attachment.

Only to think about it makes me weary and almost vomit.

This unappetizing mound of mess and filth,

Contaminated by the thirty-six impure substances.

A body born of habitual patterns is the basis for suffering,

And many animals have their own karma so negative,

That anyone eating their flesh will find it hard to win liberation.

The Buddha said that meat and alcohol are impure gifts

And to offer them does not count as generosity.

Therefore who would eat this food of the afflictions?

The pretas live for many thousands of human years

Seeing neither food nor drink, and enduring only suffering,

But we human beings can even drink cold water,

And have plenty to eat and drink besides meat and alcohol,

When we are still not satisfied by these,

How could we repay past kindness so unfairly?

Throughout the course of countless aeons past

In every world within this universe as vast as space itself,

There’s not a single being who has not been our own mother.

And the mother’s milk we’ve drunk would fill a billion seas.

Now I let go of all pretense and take the Three Jewels as witness:

In the past, under the sway of ignorance and habitual patterns,

I ate my parents’ flesh and did not remorsefully confess.

Now with a pure motivation that includes the four powers,

As in the saying, “I was not, am not and will not be attached,”

From now on, may the thought of meat-eating never enter my mind,

And if I do eat meat, may the Three Jewels send me punishment.

May the protectors and guardians look over me at all times.

Now if I were to eat the flesh of my past mothers,

There would be none in the three realms with a greater transgression.

The Buddha said that harming others even slightly impairs our vows,

So what need is there to mention flesh-eating which is akin to killing,

In the Parinirvana Sutra, the Lankavatara and elsewhere, it is said

That eating meat is tantamount to taking life,

And it is forbidden in both the greater and the lesser vehicles,

But in particular it is not permitted for a bodhisattva.

Our teacher himself when he appeared as a partridge’s young,

And as a ferocious beast[3] in the wild would not eat meat,

So how could his followers ever do so?

In accordance with the guidance of the Buddha himself,

It was also renounced by many great masters of India and Tibet,

So its faults are beyond the scope of imagination.

Not cultivating negativity is itself a genuine Dharma practice,

So may I always be in harmony with the genuine teachings!

When I have seen the boundless faults that come from eating meat,

Even to think about it makes me sick like I have been poisoned,

And so I, the great beggar who goes by the name of Duddul,

Wrote these words advising myself to renounce it,

In the Sky-Fortress hermitage of White Rock,

That come from meat-eating in all sentient beings,

So that they may see the thousand buddhas face to face!

[2] This means that you have not seen or heard anything to indicate that the meat has been butchered specifically for you, and not only that, you do not even have any doubt that this might be the case.

[3] These are references to Buddha’s previous lives, as recounted in the so-called “Birth Stories” or Jataka.