An Explanation of the Praise to Noble Mañjushri 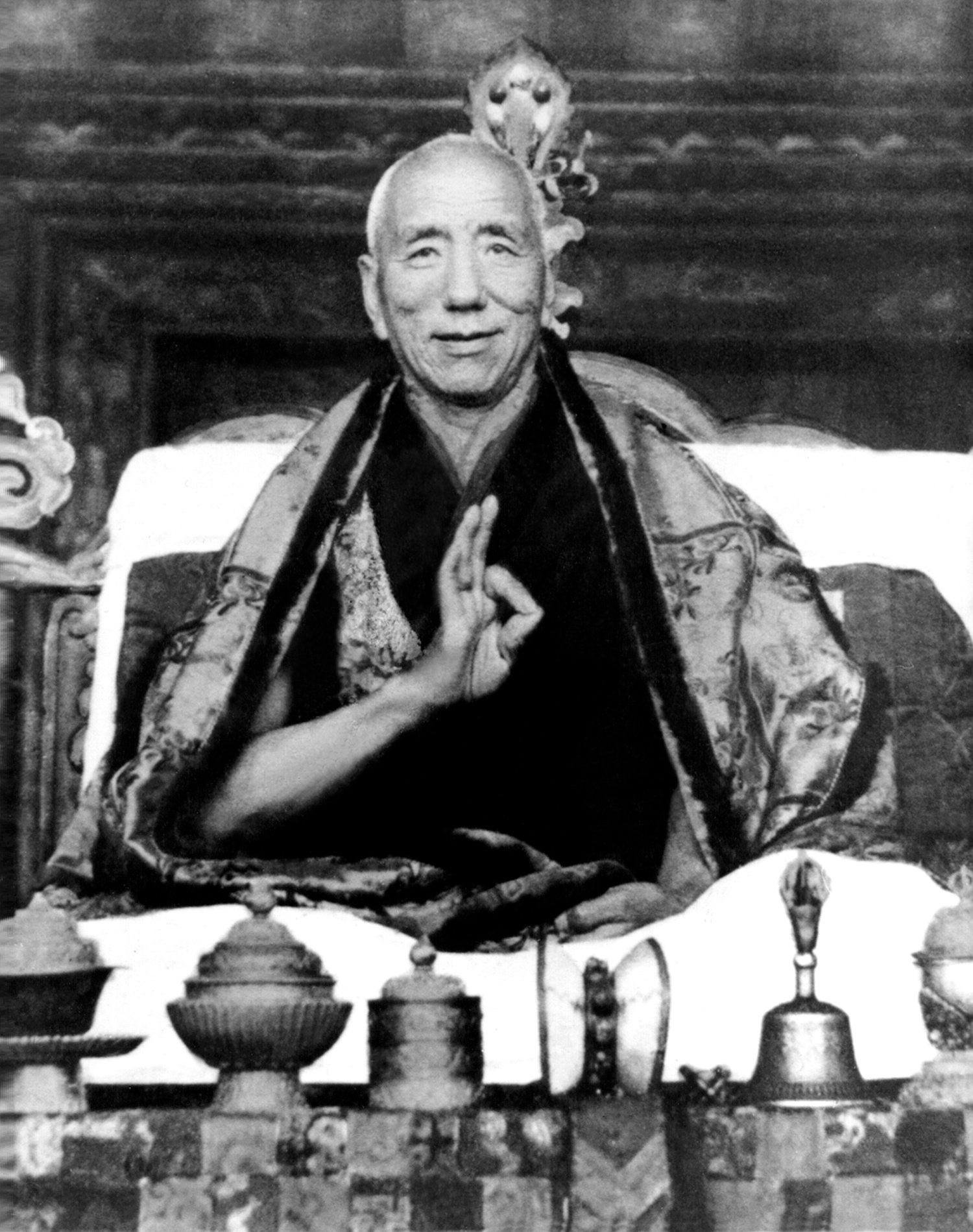 (known as): "The Splendour of Wisdom’s Excellent Qualities" 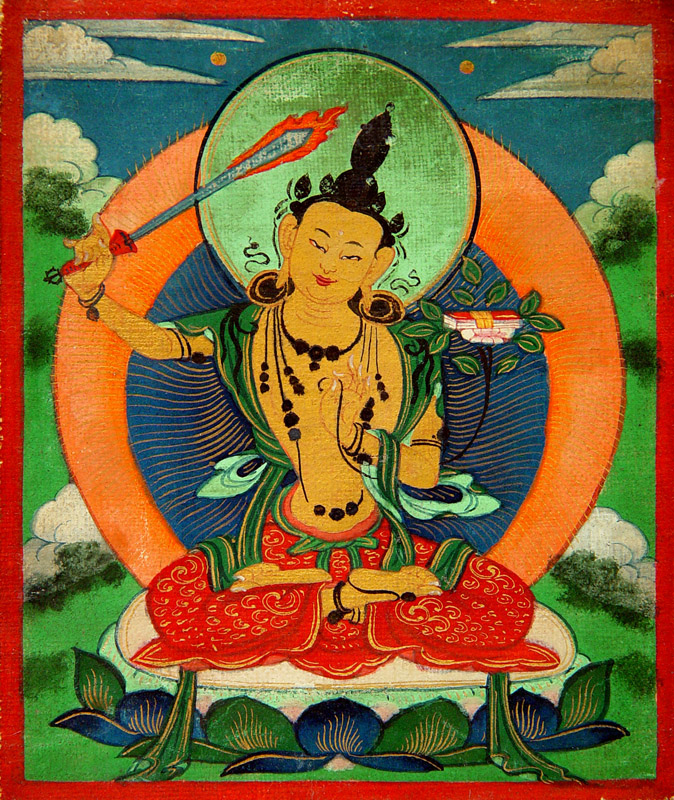 This explanation of the praise of The Splendour of Wisdom’s Excellent Qualities has five parts: (i) author, (ii) title of the work, (iii) translator’s homage, (iv) actual main part and (v) conclusion.

Here, some scholars claim that this text was written by Acharya Vajrashastra. Others have said that in the past, in the noble land of India, five hundred panditas were asked [by their abbot] to compose a praise to Mañjushri, and when they did so, Mañjughosha blessed them so that all their praises turned out exactly the same, and they felt confident that this must have come about through Mañjushri’s blessings. It is said that the name of the praise too was taken from the name of their abbot: Shri Jñana Gunaphala.

In any case, the author was someone in whom we can have confidence.

“I prostrate to the transcendent and accomplished conqueror, the Glorious Gentle-Voiced Lord.” This is the translator’s homage, made before undertaking the work of translation, for the particular purpose of ensuring its accomplishment.

In this, there are two sections: (1) the actual praise and (2) the benefits.

How is this? That too is here explained. Imagine the sun free from the obscuring veils of dusty haze and clouds; like this, your wisdom, when it discerns all dharmas, is utterly purified of those stains of delusion that obscure our true nature, and it is brilliant with the light of wisdom that penetrates all knowable things. How this wisdom perceives its objects is also explained. It says that you perceive the whole of reality, everything that exists, all dharmas—even the most subtle—included within ‘thorough affliction’ and ‘total purification’ from visual forms up until omniscience, and you see them directly and nakedly, exactly as they are, clearly discerning their essence and their distinctive characteristics.

At your heart, you hold a book of the prajñaparamita, the complete teachings on the profound and vast graduated paths of the bodhisattvas, in order to symbolize the fact that—as stated above—you possess the twofold wisdom that knows all things exactly as they are.

All sentient beings without such lasting qualities are trapped in the prison of samsara—from the peak of existence down to the lowest hell of Avichi—where the three doors of their body, speech and mind are shrouded in the thick darkness of ignorance, as they cling to concepts of “I” and “mine”. For all these beings without exception who are, as a consequence, tormented by the three kinds of suffering, you possess a deep, caring compassion. This is illustrated by an example; just like the mother of an only child who loves him or her so tenderly, you, Mañjughosha, have the loving and unbiased wish to rescue from suffering each and every sentient being, who is currently tormented by frustration and pain.

Inspired by this great affectionate love, and seeing the way things are, in order to establish all beings in the highest possible state of attainment, you speak and thereby clearly reveal what should be adopted and what should be abandoned, in a single voice that nevertheless has the sixty melodious tones of Brahma’s speech. ‘What is its function?’ you might ask. When the dragon of thunder lets out his mighty roar, it rouses all other beings from their sleep. Similarly when you speak with the voice that possesses these special qualities, and the beings to be guided hear the great roar of the 84,000 sections of the Dharma thundering in their ears, it rouses them all from the heavy slumber of their disturbing emotions, and breaks through the tight chains of defiling karma, which cast them into samsara, perpetuate it and keep them bound within it.

In order that you might inspire all beings to attain the state of liberation and omniscience, on your right you hold the sword of knowledge, the essence of all the buddhas’ wisdom, which also has its symbolic meaning. On the basis of the wisdom and loving compassion described above, with your enlightened activity of speech, you dispel the darkness of ignorance, in which beings cling to “I” and “mine” and are thus prevented from seeing reality. Since in the process you cut through all the fresh shoots of suffering, such as birth, old age, sickness and death, that develop out of ignorance, you hold the sword of wisdom, symbolizing that this happens cleanly and unobstructedly.

In definitive terms, Mañjushri, you are now, and from the very beginning you have always been, a genuine buddha, in whom all the qualities of abandonment and realization are totally perfected, because you completely traversed all ten bhumis, such as the Joyous and so on, and purified the two obscurations, together with any latent habitual tendencies, many incalculable aeons ago. Nevertheless, from a merely provisional perspective, you appear as the foremost of all the bodhisattvas, and demonstrate the means of training as a bodhisattva in the presence of all the victorious ones and their heirs throughout the ten directions.

Moreover, from the perspective of the mantrayana, there is no doubt whatsoever that you, Mañjushri, are a buddha. In fact, this is even stated in the sutras. In the Sutra of the Array of Mañjushri’s Pure Land, for example, it says you have completed the ten bhumis. And in two other sutras—the Surangama-samadhi Sutra and the Angulimala Sutra—you are clearly referred to as a buddha.

Your enlightened form is adorned with the ten times ten plus twelve—which is to say one hundred and twelve—major and minor marks.

Given that you, Mañjughosha, the “Gentle-voiced,” are in possession of these qualities of enlightened body, speech, mind and activity in their entirety, we prostrate in homage before you, showing the greatest respect with our own body, speech and mind, and pray that you may dispel all the darkness from our own minds, and, more generally, from the minds of all living creatures.

Benefits of Reciting for a Certain Time

As regards the benefits to be gained from reciting this, the king of praises, for a certain period of time, someone with faith and diligence, who recites this praise with a pure, altruistic motivation that is untainted by hypocrisy, and who is intent upon complete enlightenment for the sake of others, will receive benefits according to the number of recitations. As they recite the praise once, seven times, twenty-one times, or even a hundred or a thousand times each day for a month or a year or whatever period, they will gain increasing qualities, such as the purification of their obscurations. By reciting it once in this way, the obscurations that obstruct the arising of enlightened qualities will be slightly purified, and they will engage in the four close applications of mindfulness. By reciting it seven times, they will gain the ability to retain the Dharma precisely as they have heard it, which is the direct cause for developing enlightened qualities. By reciting it twenty-one times, they will develop courageous eloquence—that is, the unobstructed intelligence that is the context for enlightened qualities—and thereby apply the diligence of the four correct endeavours. With a hundred recitations, in order that their qualities might be brought to completion, they will gain the power of total recall, so that whatever learning and courageous eloquence they have already gained will never be lost, and they will achieve the samadhi of the four miraculous limbs. Through a thousand recitations, they will gain, as the function of your enlightened qualities, the power of wisdom that enables one to defeat opponents in debate.

Thus it continues, so that if you are able to recite more than a thousand repetitions, you will gain the strength of wisdom, at which point your wisdom will become capable of withstanding challenges from opponents and any other circumstances. This serves to illustrate that you will gain the immeasurable qualities of the paths of training, such as the other powers and strengths (meaning faith and so on), the seven branches of enlightenment, and the eightfold noble path, as well as the qualities of the path of no-more-training.

Benefits of Reciting it Continuously

Beyond this, it will be explained how benefits arise from reciting the praise continuously. Someone whose mindstream has been purified through faith, diligence and two-fold bodhichitta, who recites the praise three times a day throughout their lives will come to possess all the qualities mentioned above. Upon the foundation of ultimate bodhichitta, meditating on shunyata (the aspect of wisdom) becomes the direct cause, and compassion (the aspect of skilful means) becomes the contributing condition, for completing the five paths. Then, upon the foundation of relative bodhichitta, skilful means and compassion become the direct cause, and wisdom and shunyata the contributing condition, for reaching the ten bhumis.

As the paths and bhumis are gradually traversed in this manner, the qualities of abandonment and realization grow proportionately greater, and one swiftly arrives at the ‘citadel’ wherein all knowable things are understood with perfect wisdom. At the culmination of the paths, one actualizes the dharmakaya for one’s own benefit. At the culmination of the bhumis, one benefits others through the two form kayas, and, like a great captain, performs the enlightened activity of liberating all beings not only from the crippling sufferings of samsaric existence but also their causes, continuously, for as long as space remains.

The unfathomable benefits and blessings of this king of praises have always been evident, and remain clear even up to the present day. Having first received the transmission for focusing your awareness[iii] from a teacher belonging to the lineage, exert yourself in the practice with one-pointed faith and diligence.

Written by Mañjughosha simply as a note to aid his own and others’ memory.

Translated by Adam Pearcey with the kind help of Lama Chökyi Nyima.

[iii] rig gtad is an abbreviated form of empowerment for lower tantra deities such as Manjushri, usually involving a simple body, speech, and mind blessing.