EXPLANATION OF A SADHANA 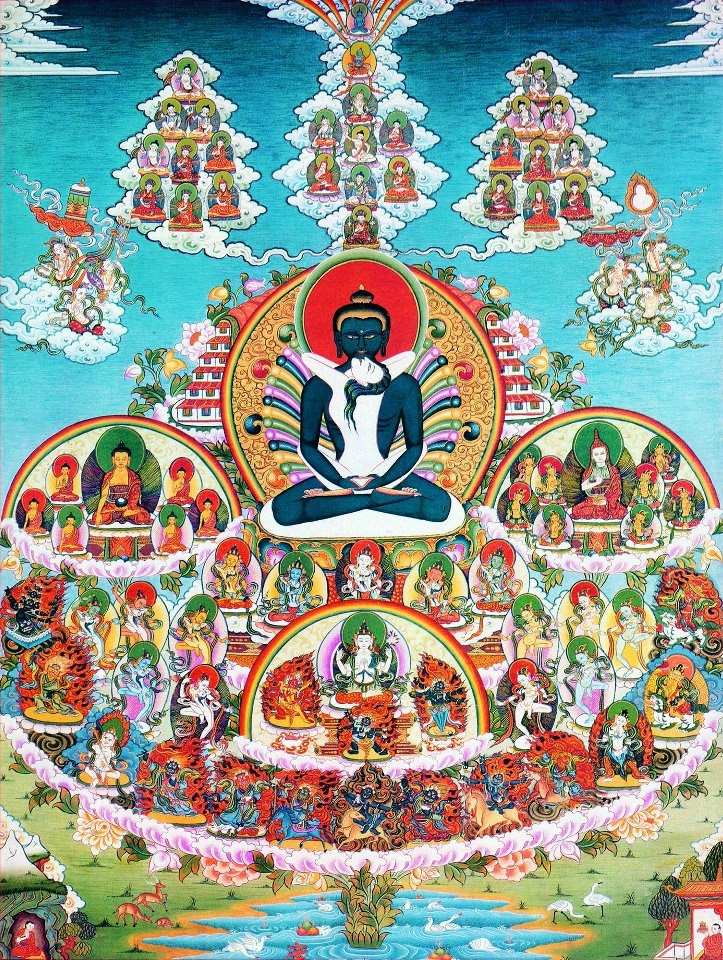 Except for one or two sadhanas like Akashagarba or Medicine Buddha Sadhanas that are done according to the Sutras,
all others belong to the Tantric tradition. There are, broadly speaking, four or six classes of Tantras.
If we consider four divisions, then we have:

If we consider six divisions, we have: 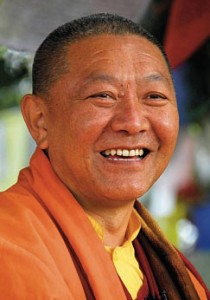 Because of these different classes of Tantras, we have different types of sadhanas, with many different sequences and ways of being done.
However, three basic things, which we call the three “secrets”, characterise sadhanas, and not only sadhanas, but all Buddhist practices:

All tantric practices belong to the Mahayana tradition, therefore, whatever practice should begin with the development of the right motivation: “I am doing this for the sake of all sentient beings, I am going to deliver them and lead them to Buddhahood". This kind of motivation is very essential at the beginning of anything that we do, and especially a sadhana.

At the end, the dedication is essential too: whatever merits we have earned by doing this sadhana, we dedicate to the enlightenment of all sentient beings.

In the middle, the rest of whatever sadhana we are doing, we should practice without any selfishness, with non attachment, with a view of Shunyata, (or without extremes, as in the Madhyamika philosophy).

In fact, three qualities are listed the texts that differentiate Mahayana Tantrayana from Mahayana:

The process is actually the same: in order to become a Buddha, we have to purify the two obscurations, that is the mind poisons and obscuration of wisdom. To do that, we have to earn lots of merits and lots of wisdom. According to the Bodhisattvayana or Mahayana Sutrayana, it is said that we have to earn merits through practice of the six paramitas for three countless aeons. However, according to Tantrayana we can complete this earning of merits that would normally take countless aeons in one lifetime, which is a very short time, by the practice of sadhanas, by different skilful methods combining mental activities and practices.

Through the practice of sadhanas, we forcefully turn ourselves into a deity, and we exercise or train to see ourselves, our body, speech and mind, as the body, speech and mind of the Buddhas, even though we have not actually reached that stage. This is what is meant by exercising at the result level, which is why Tantrayana is sometimes called the Yana of Results.

I am going to explain briefly how sadhanas are usually done.

Usually, before starting the practice, we find a place where to do it.

Especially if we are going on retreat for a long time, it is said that the place is important. If possible, it should be somewhere where siddhas or attained people have done sadhanas or practices in the past. Otherwise, it should be a place we like, which is good for our mind, where you feel comfortable and where there are no disturbances. After cleaning the place, we put up a mandala, or an altar on which we place different kinds of offerings. It is recommended that we have either an image or a painting of the deity whose sadhana we are doing.

Then we can start the sadhana.

We sit down and begin with reminding ourselves of the four foundations:

2. how impermanent it is,

3. the sufferings of samsara

After these four foundational thoughts, which turn our mind towards the practice and away from the mundane preoccupations, we usually do the guru yoga.

This means we meditate on our lama, or the refuge tree, and we get the four empowerments which we are supposed to receive every day.

The guru yoga is regarded as the most important part of the practice in any sadhana, because it is believed that we can only develop the ultimate Buddha mind, or the Mahamudra, by the transformation effected through the transmission by the guru of the Buddha's mind to us.

Every day, while saying the lineage prayer, we pray that the Buddha mind that has been transmitted from master to disciple over many generations may also be transmitted to us. Then we meditate upon the different coloured lights emanating from the forehead, throat and heart of the lama, coming into us as the lama's or Buddha's body, speech and mind. This is the empowerment.

After this, the whole mandala , the whole lineage tree dissolves into us and we try to feel with a very strong pride that we have become one with the Lama's, or the Buddha's mind.

In many sadhanas, there is no separate Guru Yoga but a lineage prayer which is regarded as the Guru Yoga.

Then there are two other preliminaries, which are the Vajrasattva practice and the Mandala Offering.

The Vajrasattva Practice is meant to purify our obscurations.

The different Buddhas have specific activities or powers due to the special commitments they made when they were still Bodhisattvas. For instance, the Medicine Buddha dedicated all his merits to have a great healing power. the purification. Vajrasattva dedicated all his powers to the purification of bad karma, of all being's misdeeds and negative actions. According to this dedication, whoever thinks of him, whoever recites the 100 syllables mantra, will be purified from all the negative actions he/she accumulated in the past. This is why we practice this Vajrasattva purification.

The Mandala Offerings are practises to gather merits.

We imagine we offer to the Buddhas and Bodhisattvas all the universes and all the things we think are best, nicest, most wonderful and pleasant. According to the Mahayana Sutrayana, we should practice generosity by giving our body, all our belongings, our wife and children. for countless lifetimes. Here, through the power of our mental activity, we are miraculously creating limitless offerings and we offer them to limitless numbers of Buddhas, Bodhisattvas and accomplished beings all over space, which is an extraordinarily swift way of accumulating great merits.

This practice has another advantage: if we actually offer something real, we can develop pride and believe we have done something great, even if we only gave something very small. But with the mandala offering, we cannot feel any kind of pride, whatever big offerings we make.

It is said that through practising generosity in this way, we will become fully familiar with this generous mentality and we will experience no difficulties whatsoever to actually give without pride our material belongings.

We now come to the most important part of the Sadhana, which is called the meditation on the deity or the Development Stage.

According to the level of Tantra to which the sadhana belongs, there are different kinds of development stages:

The deities we can meditate are broadly of two different kinds:

The wrathful deities also have different kinds of ornaments, which we will not discuss now.

The offerings and prayers, which usually consist of the Seven Branches Prayer come next. This means that we practice the following sevenfold activities:

3. confession of faults and purification,

4. rejoicing in the merits and good works done by others,

6. requesting them not to pass away but to stay in Samsara, and

Then comes the recitation of the Mantra.

After we have repeated the mantra as often as we wished or whate­ver number of times was required, we usually repeat the vowels and consonants of the Sanskrit alphabet. This is done in order to compensate the mispronunciation during the recitation of the Sanskrit mantras. Sometimes, the 100 syllables mantra of Vajrasattva or other mantras are added.

If there are other branches or sections that are "aids" to the main sadhana, like the offering of tsogs, or the worship of guardian deities, etc...they are usually done now.

After that, we dissolve the mandala or visualisation.

This serves the purpose of Lhathong, or Insight meditation.

If we have received instructions on insight meditation, or on Mahamudra, Madhyamika or Mahasandhi, we apply them at this stage.

Emerging from the meditation, when we return to the mundane level of consciousness, we again dedicate whatever merits we may have gained through the practice we have just done for the benefit of all sentient beings, we say the wishing prayers and conclude the sadhana by the mangalam prayer, which means "auspicious prayer".

This was a very short outline of how a sadhana is done.

Q. If you practice a deity very often for a long time, do you not end thinking

this deity is really existing for you?

Q. Does the deity really exist by itself, outside our mind?

Q. I asked the question to determine whether this form of Buddhism is religious, with worship of deities, and a personal link between a "god" and a "person".

Q. Are deities forms of Buddhas?

Q. May I add something? We should absolutely leave behind the Western concept of a God outside ourselves if we wish to come to any understanding of Buddhism. It is a very deep difference with the Eastern approach.

Should we consider two levels of reality of the deities, one being the relative level: the deity exists, the other, the absolute level: there is only the Dharmakaya?

A. Yes, you have answered the previous question. Thank you for answering it for me.

Q. For the choice of a deity for a sadhana, are we obliged to limit ourselves to the Tibetan pantheon, or can we go outside the Tibetan tradition to chose a yidam?

A. Well, according to the Tibetan tradition, we have to chose from the Tibetan pantheon. There is such a large choice! If there is something outside, it might be chosen, I do not know...

A. Actually, the form you want to take is not so important, though it was considered so in the tradition. But in fact, it does not make much difference. It may only not be accepted by other Tibetans or Buddhists.

Q. When we look at other Buddhist traditions, for instance in China or Japan, we see so strikingly different representations of the same Buddhas or Bodhisattvas, that if you are not well versed in the iconography, you cannot recognise them! Even sexes change!

A. That is right, Chenrezig, that is Avalokiteshvara becomes the female deity Quan Yin in China.

Q. Names were borrowed from the Hindi, and then changed by the Tibetans.

A. You cannot say Hindi, but well, Indian language. Tibetans did not change the names, but they unwillingly deformed them because they were unable to pronounce them.

Q. We talked about Bodhisattvas yesterday, and one of the greatest Bodhisattvas, whose doctrine has convinced the whole world, is Jesus Christ. So can we take the Christ as yidam?

Q. I do not want an evasive answer. It is yes or no, or I do not know!

A. I personally cannot see anything wrong with taking Christ, or whoever it may be as a yidam if you like. But I do not know whether the Christians would like it if the Buddhists take the Christ!

Q. Is it necessary to have so many deities in the sadhanas, or is it possible to attain the goal with only one deity. That means we are back to monotheism.

Q. Then you only practice this one, and this one only?

Q. I do not like the encounter between different traditions, because I prefer that each tradition keeps its purity. In our case, us Westerners, if we have belonged to another tradition in the past, like many Christians, who now enter the Buddhist path, it is much better to forget all about our former engagement, to be able to understand fully this new tradition.