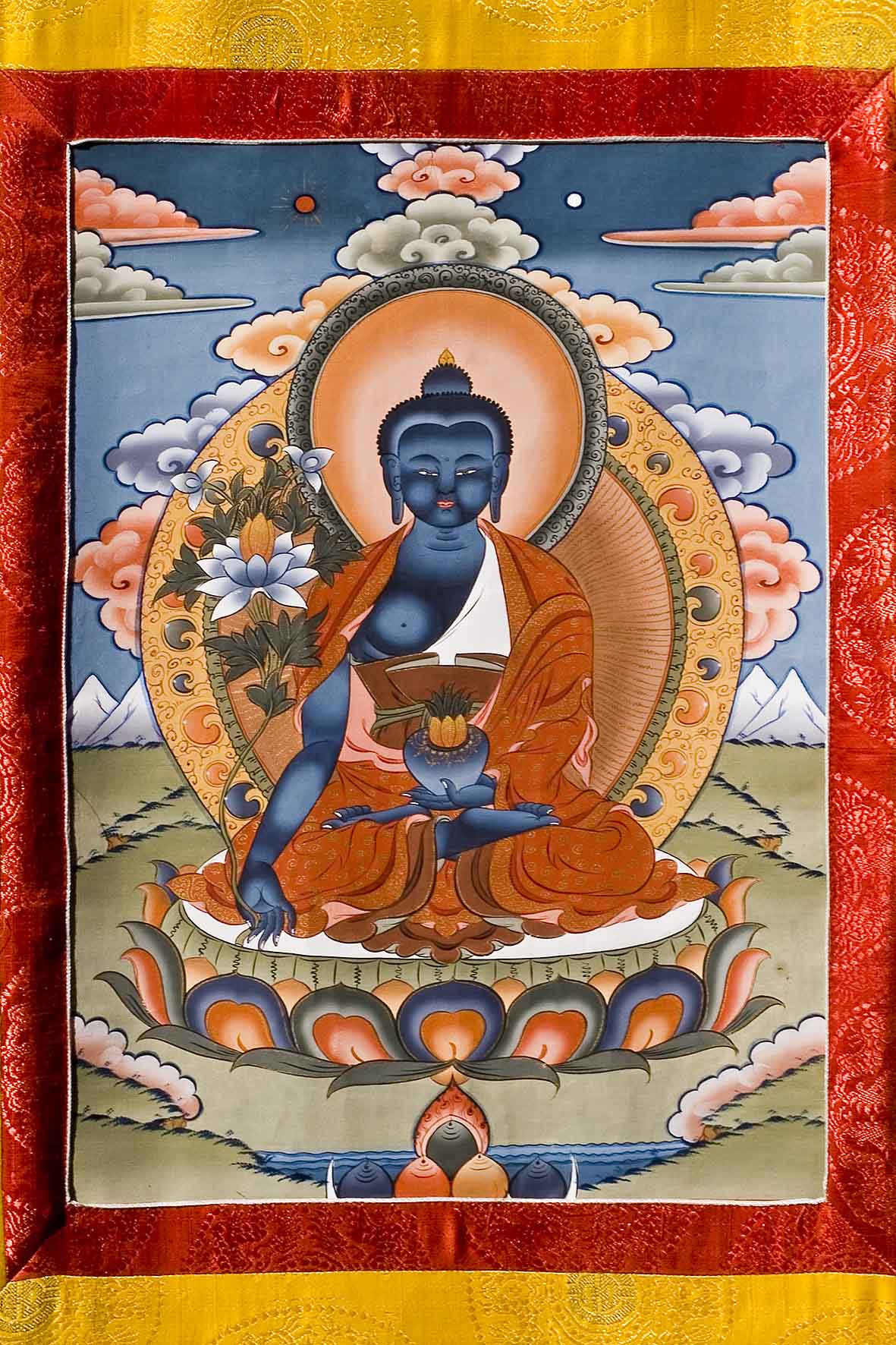 A Practice That Is Extremely Effective

In the Removal of Sickness

In his "Introduction," the Editor, Lama Tashi Namgyal,
sets the these teachings on the Medicine Buddha Sadhana in the context of Buddhist meditation practice,
in general, beginning with the statement "All of the Buddha's teachings can be subsumed under the
two categories of shamatha and vipashyana— calm abiding and insight."

After expanding and clarifying this general insight, the Editor extends it to the particular case of the Medicine Buddha practice:

"If one meditates on the Medicine Buddha, one will eventually attain enlightenment, but in the meantime one will experience an increase in healing powers both for oneself and others and a decrease in physical and mental illness and suffering. Whether or not we have a very strong motive to attain buddhahood, we all desire these sorts of relative objectives, so deity meditation provides tremendous incentive for the practice of dharma. And yet deity meditation is just another version of shamatha and vipashyana. When one meditates on the form, the attire and other attributes, the entourage and environment, and the internal mandala of a deity, and when one recites the deity’s mantra, one is practicing shamatha; and when one realizes that all that one is meditating on is mere empty appearance, one is practicing vipashyana. But because meditation on the deity and on the union of the deity and one’s own root lama instantly connects one with the empty clear light nature— which is the essence of the deity, the guru, and the lineage, as well as being one’s own essential nature— the power of this form of shamatha to purify the mind of the practitioner of the mental obscurations blocking his or her insight is immeasurably greater than that of ordinary tranquillity meditation on mundane objects like the breath or a flower or a candle flame. And since the forms upon which one is meditating are mere mental fabrications, their emptiness is more immediately apparent than, say, the emptiness of something like the Jefferson Memorial or the Washington Monument.

This is all possible because of the special quality of the vajrayana, which takes enlightenment as the path, rather than seeing it merely as a goal. Through the three processes of abhisheka, which ripens the mental continuum; oral transmission, which supports one’s practice; and the teachings, which liberate, one is connected directly to the enlightened state transmitted by the guru and the lineage. Thereafter, when one practices or merely brings to mind those teachings, one is instantly reconnected with that compassionate primordial awareness, and this constant reconnecting then becomes one’s path, bringing with it the rapid purification of mental defilements and the rapid accumulation of merit and wisdom. The recognition of this connection is the uncovering of one’s own wisdom. If it goes unrecognized, it still exists in the practitioner’s mental continuum as a seed, which will gradually ripen according to conditions."

Then the teachings by Thrangu Rinpoche begin with an introduction which discusses why someone might chose to do this practice— what the point is of doing the practice at all— and how it is possible for this practice to have the very wonderful results that it has.

"We might think that fundamentally we are practicing the Medicine Buddha in order to benefit our own bodies, whereas the motivation of bodhicitta is the wish to benefit all beings. But in fact there is no contradiction, because, in order to be effective in benefiting other beings, we need to accomplish an excellent samadhi or meditative absorption; and in order to accomplish that, together with the insight and realization that it brings, we need to have a stable practice. In order to have a stable and profound practice, we need to be physically and mentally healthy or comfortable, because by being comfortable in our body, and comfortable in our mind, we will be free of obstacles to diligence in practice and free of obstacles to the cultivation of meditative absorption.
So therefore, we are practicing the Medicine Buddha in order to attain states of mental and physical health or balance, not merely for our own benefit, but for the benefit of others as well."

"In most religious traditions, the deities of that tradition, when they are related to or imagined, are imagined in front of one. Then, visualizing the deity or deities as being present in front of one, one prays to them, and by doing so hopefully one receives their blessing, which benefits one in some way. In the vajrayana tradition, however, we regard the blessing and the power and the qualities of the deities as being innate, as being within one’s own mind."

"It is through regarding oneself as the deity that defects are gradually eradicated and qualities gradually revealed. The primary technique of visualization is to visualize ourselves as the deity, because the potential to transcend our problems is innate rather than external to us."

"We supplement the visualization of ourselves as the deity with visualizations such as imagining the actual wisdom deities themselves dissolving into ourselves again and again, by means of which we receive their blessing. Sometimes we visualize the deity in front of us, separate from ourselves, think-ing that rays of light from the deity’s heart engulf and pervade us, granting the blessing of the deity. And sometimes we visualize that rays of light, which embody the blessing of that deity in front of us, strike all beings, removing their obstacles, increasing their longevity, wisdom, and so on."

"With regard to the empowerment, you should understand that the Medicine Buddha practice is not solely a vajrayana practice.

Like the practice of mahamudra, it is a combination of vajrayana [tantra] and sutra. For example, while we could say that mahamudra is primarily taught in the vajrayana, it is also found in certain sutras, such as the Samadhiraja Sutra, and so forth. In the same way, this practice of the Medicine Buddha is a combination of what the Buddha taught about the Medicine Buddha in the sutras of the Medicine Buddha and in various tantras. Because it is connected with vajrayana, it is most appropriate to receive the empowerment to enhance the practice; but because it is also connected with the sutras, it is acceptable to do the practice without the empowerment as well."