A Gift of Dharma to Kublai Khan

To the incomparable Enlightened One, who is endowed with the splendour

of fame in name and the splendour of wondrous virtues in actual fact, I 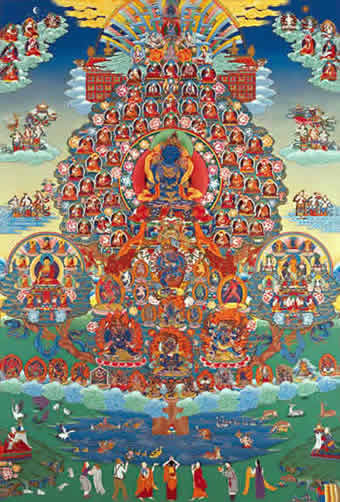 Although you, mighty emperor, know already the discourses on worldly

and spiritual science, still, as with the songs and music of musicians

before, why shouldn't a poet repeat wise words?

sake of countless disciples indeed are meant to be practised. But how

may this be done?

command but dwell in right conduct without harming others and, as a

result, would ever grow in good fortune and even earn the praises of

his king, so, too, with a person who accepts, in accordance

with his ability to accomplish them, thel rules of discipline

paths: if, after properly receiving vows from an abbot, that person

unseen sufferings in worldly existence and by shame whenever he

reflects, 'The multitudes of Noble Ones who know the thoughts of other

He, as a result, would become a foundation not only of seen and unseen

joys in worldly existence, but of the virtues of perfect liberation; he

even receive the praises of Buddhas.

These three realms of existence, after all, are just suffering, while

Nirvana, too, is just peace. Looking with pity, therefore, on those who

wish either for worldly existence or Nirvana, it is the Buddha alone

who, Himself free from sorrow, removes sorrow, and who, having Himself

attained great Joy, bestows joy. And He has appeared from amongst

The methods He used we can also use. Without timidity and laziness,

therefore, you should unwaveringly aspire to win highest enlightenment

and feel free to think, 'I must surely attain Buddhahood . '

Guard as your own life the vows you have made which, if violated, will

cause you to be burnt in hells and which, if preserved, will enable you

to experience truly wonderful results in proceeding from Joy to Joy

Since the three sets of vows--of the Hinayana, Mahayana and Vajrayana

paths--are the foundation whereon all virtues may arise, remain and

grow within oneself and others, try from the very first to be firm in

Become certain that the Teaching, which is virtuous in its beginning,

middle and end, and whose words are quite flawless and not contra-

dictory to the two logical proofs of valid knowledge, is the unique

Know, too, that the Enlightened One who taught it is endowed with

unhindered wisdom and great compassion -- since He revealed (the truth)

without close-fistedness --and also with tremendous power.

similar to His, because also your own sphere of spiritual activity is

identical to theirs, know the noble Assembly of Bodhisattvas to be the

best field for increasing your merit.

to these Three Jewels, that he is endowed with the same virtues they

have, and that he sustains you with kindliness, always attend and

meditate upon him with unflagging faith.

the causes of pain and with a constant state of unsatisfactoriness, and

like yourself, moreover, in wishing themselves to be free from

unhappiness and its causes, you should unceasingly meditate great

compassion for all living beings.

purposes, strive wholeheartedly with genuine devotion to acquire it.

In brief, since a mind endowed with faith, compassion and devotion is

the precursor of all spiritual accomplishments, perform every least

virtue with these three present.

your own body, and visualise that your dwelling place is a Buddhafield

wherein all beings are Conquerors surrounded by Bodhisattvas and

Disciples. Then worship yourself and others with oceans of offerings

consisting of the enjoyment of the five sense-objects.

Realise that your own virtuous preceptor and all the Conquerors are

truly equal and nondual in form, activity and essential nature. At all

times, you should envision him in front of you, or seated atop the

crown of your head, or within the lotus of your heart, and pray to him

or meditate upon him as being nondual with yourself.

Of virtue, nonvirtue, pleasure, pain and all the phenomena of Samsara

and Nirvana, mind is the substratum.

If you were to examine that mind thoroughly from every angle, you would

realise that it has neither colour nor shape, nor is it single or

manifold. It therefore has no nature; therefore it is not arisen,

neither does it remain nor cease. It is devoid of both centre and

periphery, and is thus away from all extremes. It has just the nature

Even so, cognition is not stopped. Hence mind has the nature of nondual

As one's own mind is, so, too, is the nature of all beings' minds.

Understand thoroughly that all phenomena are nondual

appearance-and-emptiness and place your mind in meditation without

Through meditating nondually on the two objects (one's preceptor and

the Enlightened One) and objectlessness (emptiness), you will attain

which cannot be disturbed by thoughts.

Joyfully remembering that every act of virtue or nonvirtue increases

the strength of one's virtuous or nonvirtuous inclinations, always

bring virtues to mind and strengthen them.

Especially should you recollect and analyse the support, form and

experience of your meditation whenever you have meditated upon an

object. Through examining further the interdependent origination of

meditative insight (vidarshana) through realising the true state of

their suchness, i.e., that no support, form or experience whatsoever

Following the performance of virtues, you should gather together in one

all the merit acquired through that (meditation and the like), and

fully dedicate them to the attainment of perfect enlightenment by

yourself and all these countless beings.

you offer prayers, your wishes nonetheless will be fulfilled if you

pray for a great purpose to be achieved--for mind alone is chief.

Every virtue which is adorned by this kind of recollection, dedication

and noble prayer will increase unceasingly and eventually become the

cause of great good for oneself and others.

Everything that is experienced and all other conditioned things

and sense consciousnesses) are devoid of any nature of their own

because they all depend upon causes and conditions.

You should know, therefore, that these external objects also, which

appear in various forms to, and are experienced by, mind that is

stained by mental impressions, are not real; they are like magical

dreams that occur during sleep.

ascriptions. A person would have to be mad to wish to propose

meaningless names for them, or to indulge in thoughts about them and

thereby accept them as 'conditioned dharmas'.

Never scorn the connexion between deeds and their results, for (the

teachings on) the interdependent origination of cause-and-result as it

operates in the sphere of relative truth are not deceptive. You will

experience the ripening results of your actions.

There are 'eternalists' in whose view the substantiality of phenomena

is accepted. However, no object whatsoever exists which is devoid of

you were to analyse the forms of direction and space, you could not

parts). And if a 'single entity' does not exist, whence could 'many'

appear? As there is no existence other than these, the

conceptualisation of 'existence' (itself) is an inferior one.

Just as there is no length without shortness, how could a nature of

'nonexistence' be apprehended when even a nature of 'existence' is not

Know, intelligent one, that the Real also does not consist of 'both'

because this possibility has been removed by the rejection (of each

individually); nor does it consist of being 'neither' of the two,

because there is no logical proof for this possibility and, in any

case, there is no possible 'bothness' to which it could be

formless and thus has no directions', (we would have to admit that)

it also becomes plural and false if subject and object are identical,

(the latter being manifold).

If, however, subject and object are different to one another, how then

do objects become objectified and mind subjectified? If the two arise

dually, in what way (e.g, simultaneously or otherwise,) do they appear?

Finally, what kind of liberation is achieved merely by rejecting

Since the object is not established as real by nature, the subject,

too, is not established as real. The claim that there exists somehow a

pure consciousness apart from these two, is as extremely wrong as the

(Sankhya philosophers' notion of a) 'Self' (purusha) distinct from the

Be free from supports, knowing that all phenomena from the first, are

Marvellous and much more wondrous than any wonder is this knowledge

Realise that objects are the nonduality of appearance-and-emptiness,

that mind is the nonduality of knowledge-and-emptiness, and that the

paths to liberation are the nonduality of methods and wisdom.

Finally, act (in accord with this insight).

The stages of cause, path and result should be understood thus: the

interdependent origination of the relative sphere is like illusion; in

the ultimate, the nature of dharmas is emptiness; finally, both are

meditation, conclusion (dedication of merit and recollection) and the

correspondence to the three stages of cause, path and result), all the

paths of virtue are gathered together in fifteen factors.

Whoever strives to perfect these (fifteen) factors in each performance

of virtue enjoys the happiness of fortunate states and accumulates

oceans of the Two Collections (merit and transcendent wisdom).

Through the clarity of his meditation, he becomes joined with the Aryan

and noble conduct. Then, attaining the goal (of Buddhahood) through

coursing along the final stages of the Path, he puts an end to all

the very beginning. (His mind) becomes one flavour with the

Dharmadhatu and is transformed into the Svabhavikakaya which is the

transcendent wisdom of Dharmadhatu and the knowledge of the perfection

For him, the dharmas of worldly existence become transformed through

Enlightened One) adorned by (112) marks and signs of perfection His

voice becomes (the Voice of the Buddha) endowed with sixty tones; his

mind is transformed into Transcendent Wisdom and is also endowed with

omniscience. Passions are transformed into the boundless virtues of the

Conqueror and constitute the Sambhogakaya. His deeds are transformed

into the 'Task-Accomplishing Wisdom' and the countless kinds of

enlightened activity which form the Nirmanakaya.

These five wisdoms constitute the perfect realisation of the

Enlightened One and, inasmuch as He is also endowed with spiritual

power, they are unending and uninterrupted. May you also, O emperor,

deep sense of the noble path, may all living beings with you, O king,

as their chief, quickly attain the highest stage of enlightenment.

My own mind, too, has become encouraged by composing these lines as a

gift of doctrine and so I shall speak further of another matter:

The time when you should make efforts is now: make firm the good

fortune you have, ensure long life and the success of your lineage and

It is right to make efforts without distraction. At a time when Dharma

the throne, how can your mind remain indifferent to the plight of those

Though I am not old, the strength of my body is slight and my mind

inclines to be lazy; therefore I wish to be excused for awhile that I

may seek Dharma's meaning in solitude.