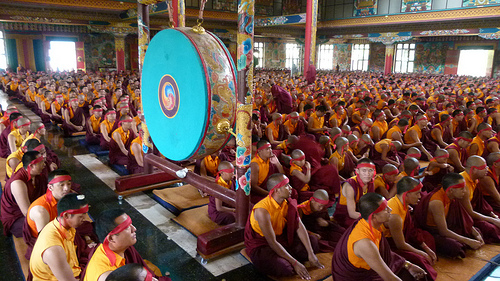 In order to practice Vajrayana Buddhism, one has to receive Wang, Lung and Tri (or

empowerment, oral transmission and instructions) from a qualified Lama (Guru or

Master). The term "Wang" in Tibetan, or "Abhishekha" in Sanskrit, literally means

"Empowerment". It refers to a ceremony in which a qualified Lama places a disciple

in touch with a particular Tantric Deity and empowers him to recite the Deity's mantra and meditate on the non-duality between his own mind and the Deity's mind. Much happens during the Empowerment Ceremony and everything that happens has its special meanings, not just for ceremonial decoration or ritualistic purposes.

What Happens During An Empowerment Ceremony

An Empowerment always involves several different initiations. A major Empowerment may have four initiations, some of which are sub-divided into several Sub-Initiations. A minor Empowerment generally has three Initiations - for the body, speech and mind. These are the "three doors" through which we act and create karmas. The goal of Tantra is to purify all our karmas of body, speech and mind by removing our afflictions and obstacles to our liberation and omniscience, so that our actions become no difference from those of a Buddha.

Receiving an Empowerment is like planting of a seed. With the right conditions later,

this seed will sprout and grow into Buddhahood. During the Empowerment, each of

these three doors is blessed individually, thus, there is a Body Initiation, a Speech

Initiation and a Mind Initiation. In this way, the defilements of each of the three doors are purified and you are empowered to visualise yourself in the form of the Deity, to recite the Deity's mantra and to meditate on the mind of the Deity.

The Sanskrit term "Guru" refers to a person of great spiritual attainment and authority; it was translated into Tiberan as "Lama". Tibetan monks who do not have any special attainments are not considered as lamas. Also, a lama need not be a monk. Vajrayana is open to all, and married persons are not barred from receiving or giving any of the Tantric teachings. Devotion to the Lama who is your Guru is most important, and it is necessary for spiritual attainment. The purpose of Tantric practices is to realize the Buddha nature in each of us, and you should seek as your Guru, a lama who has himself realised this. Having found such a lama, you should cultivate devotion towards him so that you can recognise more clearly the Buddha nature as it is manifest in him. In this way, you are led to realise the pure nature of your mind as the mind of the Buddha also.

What To Do When Attending An Empowerment Ceremony

Initiation from the Buddha Himself. An Empowerment always has three stages:

the Preparation, the Main Part and the Conclusion.

During the Preparation Stage, you should do the following:

1. Wash your mouth before you enter the hall.

2. On entering the hall, make three prostrations towards the Lama and/or the Shrine.

3. Take your seat on the floor. Do not lie down or sit with your legs stretched towards

the Lama or Shrine.

4. While waiting for the Empowerment to begin, cultivate the right attitude by reflecting the reason why you want to receive the Empowerment. The right reason should be that you wish to liberate all sentient beings from their sufferings caused by the afflictions of desire, hatred and ignorance.

5. Make a Mandala Offering by imagining that you are offering the universe,

containing all the good things, to the Lama.

6. Think and believe that you are receiving the Empowerment from the Deity,

represented by the Lama.

7. Recite the Seven-fold Prayer, which is to confess all sins, rejoice all virtues, take

refuge in the Triple Gems, promise to hold the Absolute Bodhicitta, to maintain and

actions for the welfare of all sentient beings.

Usually, the main part of the Empowerment consists of the Body, Speech and

when incense is wafted about by the assistant monk.

Speech Initiation - Visualise the Mantra of the Deity emerging from the

heart of the Lama through his mouth and entering your own heart, through

your mouth. The Lama then recites the Mantra 3 times, which you repeat

heart. Concentrate on this Seed-Syllable (which is the Essence of

mind and that of the Lama's or the Deity's.

During the concluding stage of the Empowerment, you do the following:

2) Perform the final Mandala Offering to thank the Lama.

3) Queue up to receive any special blessing, such as the placing of the

4) If the Mandala of the Deity had been constructed, then you should look

into it and pay homage to the Deity at its centre.

5) Make appropriate offerings (withtin your capability) to the Lama.

6) Dedicate the merits you have accumulated to benefit all sentient beings.