THE LIMITLESS VEHICLES OF THE BUDDHA 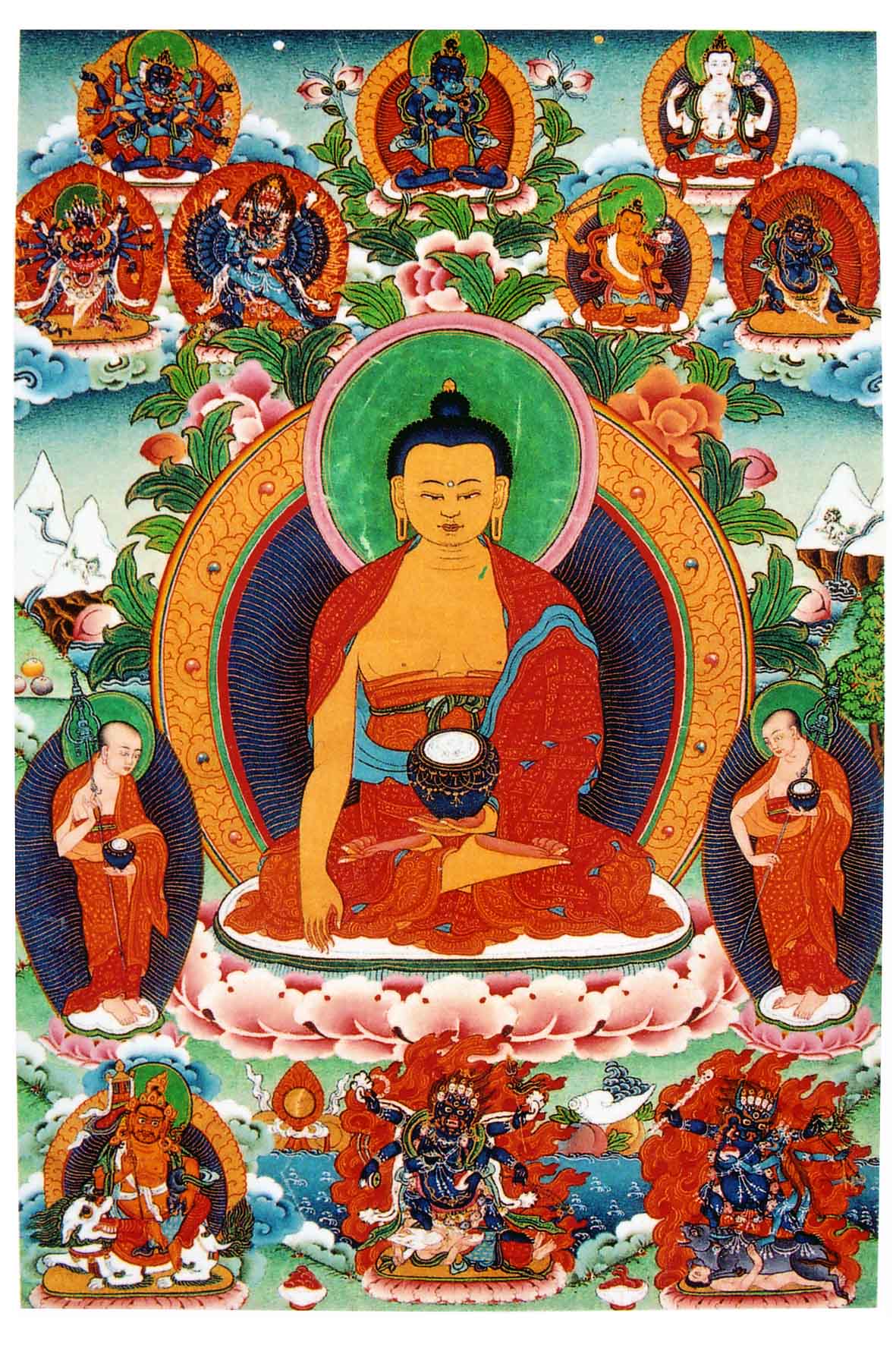 The LIMITLESS VEHICLES OF THE BUDDHA present the Dharma in many

different ways, all of which are beyond concept. Therefore, it is difficult to find the

power or ability to express these. Nevertheless, briefly and with a few words, I

shall attempt to explain some of the differences here.

The All-Knowing Guide, Lion of the Sakya clan, turned the Wheel of the Dharma

on three successive occasions. The first turning taught the elimination of non-virtue,

the middle taught the elimination of the view of self-identities and the last, the

elimination of all grounds for views.

The subjects of these teachings are the Three Trainings, and the words explaining

these are found in the Sacred Writings (Sanskrit: Pitaka), where they are gathered

into Twelve Scriptural Categories. Some people have said that the Tantra of the

Mahayana should be classified as an inner Abhidharma teaching. However, it has been

taught that it is good to classify the Sacred Writings for Tantric Yogis separately, in

a section of their own.

translated into Tibetan. But actually, there is no power which could capture the

infinite significance of the Buddha's speech. There are a great many Commentaries

explaining the meanings of these teachings of the Buddha. In the Hinayana, we

find the "Mahavibhasa Sastra" and many others; in the Mahayana, such Scholars

etc., all of whom composed a large number of explanations. There is also a great

quantity of sadhanas and commentaries to all the Sacred Writings of Secret Tantra.

All the important advice which exists is beyond the mind's estimation. But due to

the great kindness of these ancient translators and Pandits, more than two hundred

volumes of such commentaries have been translated into Tibetan. It is these texts

(of the Kangyur and Tangyur) which form the foundation for Buddhism in Tibet.

In India, the land of the Noble Beings, there was never any division of Buddhism

into old and new. In Tibet, however, as some translations occurred earlier and some

later, we find such a division. Any translations which came before the time of Rinchen

by Rinchen Zangpo and the majority of translations which followed, came to be called

Almost all of the texts of the Vinaya, Sutra, Abhidharma and of the Secret Tantra's

three outer Tantras (Kriya, Carya and Yoga) were translated into Tibetan during the

early flourishing of Buddhism in Tibet, (in the 'old' translation period). The majority

of the texts of Highest Yoga Tantra, such as Chakrasamvara, Hevajra, Kalachakra,

Tantras. But those who are non-sectarian and non-partisan praise these old translations

for their authenticity, and I think their conclusion is in accordance with the actual

the Buddha's Teachings and their Commentaries. Therefore, they may be placed

upon the crown of your head and respected.

The NYINGMA TRADITION, the old Secret Tantra, classifies the Buddha's

Dharma into nine successive Vehicles, collectively contained in the Cause Vehicle

and the Result Vehicle of Tantra. The Cause Vehicle has three divisions: the

the Mahayana Vehicle of the Bodhisattvas. In the Result Vehicle of Tantra there

are two divisions: the three Outer Tantric Vehicles, and the three great methods of

the Inner Tantric Class. All these have a great many definitions and explanations

concerning their view, meditation, action and result, but it is not possible to write

There are three lineages in the old translations of the Nyingma Tantras: the 'Distant

Oral Lineage' (Tibetan: Ring.rGyud.bKah.ma - from the direct oral teachings of the

Buddha); the 'Near Treasure Lineage' (Tib: Nye.rGud.gTer.ma - from teachings of

Khandro Yeshe Tsogyal and others; for the benefit of future generations), and the

by various Saints during visions in meditation and post-meditation).

KADAM TRADITION. This Tradition had innumerable Dharma holders. These

spread into the Sakya and Kagyud Lineages.

His vast Tradition came to cover the entire earth. He explained his view of the meanings

wisdom, which came from the treasure chest of very deep wisdom. Many of the unique

qualities of his teachings can be clearly seen in his excellent explanations.

The SAKYA TRADITION was established by the Five Great Masters (Tib:

rJe.tzun.gong.ma.lnga), 16 who based their teachings on those of the conquering

Yogi, the Great Virupa. They also followed the teachings of Naropa and Dorje

Denpa etc. and held the Sutra and Tantra lineages of many other great Indian

scholars and Saints. The Sakya Tradition also came to practise some of the

Nyingma 'old' translations of the Tantras, such as Yang.dag.phur.ba (Pure Dagger),

which became part of the Khon Tradition. Similarly, many other extraordinary

Sakya Pandita, the crown ornament of all the Learned Ones of this earth, is

debate. Except for this outstanding example, no other masters are known for

having done likewise at that time.

There are three Traditions holding the lineage of Sakya Pandita: the Sakya,

the Ngor and the Tshar. From the root of the Sakya Tradition came the three

renowned lineages of Bulug, Jonang and Bodong. From all these, a few minor

The KAGYUD TRADITION developed from the teachings of Naropa and

Maitrepa. The main founders of all the sects of the Kagyud are the three

Great Masters: Marpa, Milarepa and Gampopa. From these three Masters

the Kagyud Lineage scattered into the four major and eight minor

Lineages. It was from Gampopa's disciple, Phagmo Drupa that most of these

lineages of the Kagyud Tradition came, spreading in many different directions.

Presently there are four which have not faded and still exist: the Karma Kagyud,

The learned Saint, Khedrup Khyongpo Naljor, travelled to India and met the

two Wisdom Dakinis (Niguma and Sukhasiddhi), Rahula, Maitripa and many

other Holy Beings. He received teachings from one hundred and fifty Saints

known as the Shangpa Kagyud Tradition. Nowadays, however, this Tradition is

no longer held as a separate Tradition by anyone, although its lineages of

initiations and oral transmissions exist in both the Sakya and Kagyud.

Also from India was the Saint Padampa Sangye, who taught the Zhije Lineage

involving regulations for purification. Following him was the dakini Machig

Labdron who started the Lineage of the holy Dharma of gCod, which cuts through

In Tibet there are a great many lineages of Secret Tantra, but these are different

in name only. In their essential meaning there is no particular difference. They all

have the same goal, the accomplishment of Enlightenment.

SPECIAL CHARACTERISTICS OF EACH TRADITION

EACH OF THE TRADITIONS DOES HAVE ITS OWN SPECIAL

CHARACTERISTICS. It is well known that the Sakya and Gedan

(Gelug) Traditions both have the special ability and authority for giving

good explanations of the teachings and the Kagyud and Nyingma are

experts in practising them. Actually, earlier scholars had a saying:

"In the Snow Land (of Tibet), the Nyingmapas pioneered the Dharma,

the Kadampas were the source of one million 20 Dharma Holders, the

Sakyapas spread the complete teachings of the Dharma, the Kagyudpas

Zhalu were two great masters of the vast and deep teachings of Tantra."

This saying seems to really convey the essence of the different Traditions.

In the Nyingma Tradition, there is the lineage known as TERMA (Treasure),

which comes from the great Master of Uddiyana, Padmasambhava, who, after

coming to Tibet, manifested all the many common and uncommon Dharma

teachings for the King (Trisong Deutson) and his followers. They then gathered

beings of future degenerate times, and conceal them as mind and earth treasures.

Transmissions' existing in both 'new' and 'old' Secret Tantras.

Some scholars have questioned the validity of these Holy Treasures, but they

need to examine the purpose and necessity of Terma. That these Treasures are

argument. So please be careful, because criticizing the Dharma with anger is a

grave fault and will only cause your defilements to increase, becoming thick and

The "One Hundred Thousand Verses of the Prajnaparamita Sutra" etc. were

of Dhumathala in Uddiyana. And so, even in the Noble Land of India, we find

Treasure revelations (Terma) occurring. There are many logical arguments

concerning this, but I shall not present them here.