CHARACTERISTICS OF AN AUTHENTIC MASTER ACCORDING TO THE BODHISATTVA PATH 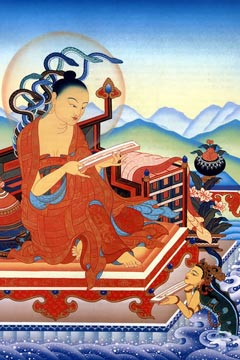 characteristics of a Master, which can be branched into seven main points.

himself with a pure mind.

teachings) and should practice their meaning.

5) Should have subdued his emotions.

6) He should have attained a certain level of realization.

7) He should be skilful in gathering disciples through the four means, being

generous, be able to lead them to the path according to their own ability,

and acting according to his word.

A person displaying such qualities is worthy of being a spiritual Master.

In these degenerate times finding a Master who embodies the complete

teaching is very difficult. The qualities that are compulsory are:

by his compassion and wisdom. He should be fully conversant in bestowing

and practicing the rituals as well as the three baskets of sutra, Vinaya

(moral conduct) and Abhidharma (Buddhist psychology). The fruit of the

certain realizations. The four means of gathering disciples should blossom

to a matured flower).

Such a Master should be followed. Most importantly according to the

Bodhisattba precepts, the Master should practice the two levels of

Bodhicitta, aspirational and practical Bodhicitta. At least he should have

these qualities. Like a ships captain leading us to the ocean shore, a

enlightenment, They are; giving whatever is necessary, speaking pleasantly,

helping others and having consistency in words and deeds.

Aspirational Bodhicitta is only the intention to attain Buddhahood for the

goal, engaging in the six perfections of generosity, morality, patience,

If we chose such a guide, good qualities will naturally arise within us like

ordinary wood becoming fragrant when left to lie in a sandal grove.

Yet the scriptures warn us, that in thse degenerate times, it may be very

difficult to find all these qualties assembled in one person. Hence a

Master who possesses half, a quarter or even an eight of these qualities can

be considered qualified to be a teacher. Furthermore, although a Master

with only a fraction of the qualities required may be found, we, ourselves,

have many obscurations, which may prevents us from recognizing what

qualities may be there. Like the clouds covering the sun, deep veils arising

of our unwholesome actions are creating obstacles for an objective

examination and taint our view. In many cases these obscurations become such

a hindrance that we cannot even recognize any qualities in the Master, we

underestimate him and develop wrong views about him.

So, not only is it rare to find a Master endowed with the required qualities

"Although the King of Gods brings about the rain, the rotten seed will not

sprout. Similarily, although Buddhas and Bodhisattvas appear in this world,

those with no fortune will not benefit from their Blessings."

We can easily recognize the authenticity of a Master when, by following him,

our own obscurations diminish and our virtues multiply. We become calmer,

more composed and our concentration is improving. In short, the benefits

are there for all to see and for us to experience.

In the following manner, a Master who is not authentic is described thus: he

doesn't possess any knowledge deriving from listening, contemplation, and

meditation yet boasts of his connections, accomplishments and lineage like a

Brahmin. He is not inclined to use the little knowledge he may possess for

the sake of others or even his own liberation, but mainly directs it to gain

short term earthly benefit. Such a person could not bring about a positive

change in the mind of his disciples, Although he has no special qualities,

some disciples are fooled by his claims and fame. Without examining the

situation, they lend him authority, expecting earthly reward in return.

Receiving adulation and offerings his pride increases. Such a Master does

students will gradually loose their way.

His Holiness Penor Rinpoche recounts the story of the shepherd lama. There

matters. He was herding his sheep everyday towards the banks of a river,

where he used to take his mid day meal, There was a large rock on the side

and without any thought or intention, the shepherds used to leave the

reminants of his meal on this rock everyday. He did not particularily

intend to make any offerings; it was just an idle habit. It happened though

that the rock was the home of three spirits, a Mara, a Naga and a Yaksha,

and they decided that they should do something to thank the shepherd. It was

decided that the Mara spirit would be the one to help him.

The Mara then entered the body of the unaware simple shepherd. When the

shepherd started to head for home, the Mara enabled him in reciting mantra

and religious texts to the astonishment of all who knew him. As he started

to go across the neighbourhood, people came to listen to him and not

examening his credentials, lineage, teachers or knowledge, spread the rumor

of his fame so that hundreds flocked to listen to the poor shepherd. They

showered him with offerings and sat him on a precious throne, which pleased

the evil Mara spirit. All this carried on until an authentic Master who had

the power of clairvoyance arrived in the area and saw what had happened.

Sending one of his attendents among the crowd, he made him spread incense

close to the lama shepherd, at which point the Mara spirit jumped out of the

fellow's body and returned to his rock. Awakened from his daze, the poor

shepherd nearly fell from the high throne muttering, "Where are my sheep?"

So we are well advised not to act in such foolish ways.

Hence when we first meet a potential Master, we should not rush

indiscriminately but rather set about examining his behavior and qualities

as described above. There is no more important choice we will ever make for

our own existence, because the Master is the one in whom we rest our trust

path to liberation. If through lack of examination we become followers of a

Master who is not genuine, not only will there be no benefit to oneself and

others, but we will waste this precious human life and this will become

cause for both Master and disciples to be reborn in the hell realms.