The Division of the Buddhist vehicles in the Nyingma school 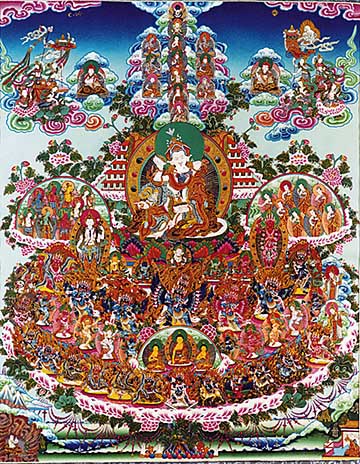 1) Vehicle of the Arhat: a Hearer (Sravaka) of the Teachings aspires to become a Arthat (Arthat is somone who is "worthy," often translated as saint into English). An Arhat is someone who, through accordance with monastic discipline and meditative realization, is free from desire and suffering. Therefore, an Arhat gains a limited enlightenment. The enlightenment of an Arhat is not equal to that of a Buddha. An Arhat is "free" from suffering, but still has not reached the final goal. Also, the Sravaka Path is for one's own personal liberation. Most of the Buddha's disciples appeared as arhats but in reality were bodhisattvas.

2) Vehicle of the Solitary Buddha: this path is when someone becomes enlightened, but is a hermit and does not teach others how to become enlightened. This only occurs when Buddhism does not exist in the world, so right now this path is non-existant.

(note: a deity in Buddhism is not a creator god; therefore the denotation should not be referred to here. A deity is either an enlightened being such a Buddha or an unenlightened being that is at a higher or more powerful position than us. The deities mentioned here are enlightened beings.)

1) Kriya-yoga: relatively the deities are seen as masters and oneself as the disciple, although absolutely all phenomena are equal. Purification, visualization, and proper conduct is emphasized.

2) Carya-yoga: the deities are seen as equal to oneself, like friends, and one develops a deep connection to that realization.

3) Yoga-tantra: one sees oneself as the deity and realizes the actualization that one is no other than the deity.

The Three Inner Tantras are:

Mahayoga: the generation stage of practice when one sees the world as a purified field and that of its absolute nature. It is called the Father Tantra.

Anuyoga: the completion stage when one actualizes the thought that the universe and all are a sacred mandala, without dualism, free from all extremes and the two truths are unified. It is called the Mother tantra.

Atiyoga: one realizes directly the ultimate and natural state of the mind (the mind of the Buddha). One transcends all phenomena and extremes.

It is said by Lochen Dharamsari,

In Mahayoga one realizes all phenomena as the magical display of ultimate mind, the

indivisibility of appearance and emptiness.

In Anuyoga, one realizes all phenomena as manifestive power of the ultimate mind, the

indivisibility of the ultimate sphere and wisdom.

in Atiyoga, one realizes that all phenomena are self appearances of the ultimate mind,

the spontaneously arisen wisdom, which is primordially free from arising and cessation.

The Great Perfection (Dzogchen) is the result of Atiyoga. The realization of Dzogchen refers to enlightenment.

The Atiyoga is further divided into the:

1) Cittavarga (Sems sDe): these are instructions on the mind, the lineage is attributed to Vairochana, one of the principle translators of the sutras and tantras of the 9th Century.

3) The Upadesabarga (Man Nhah sDe) are the guidance instructions on the essential point, which is attributed to Guru Rinpoche’s Nying thig (Heart Drop) lineage of Vimalamitra who was a great Indian master.

The Short Transmission of the Lineage (Terma Lineage)

There is a tradition within Buddhism to conceal a teaching to benefit future generations. Even the Buddha Shakyamuni concealed Sutras such as those on the Prajna Paramita, to be discovered by Nagarjuna.

The termas, and even religious objects, were sworn to be protected by certain Terma Protectors and Dakinis. These protectors and female spirits will only deliver the terma to the correct Terton. The termas were concealed by various means:

1) Earth Termas/scriptures: the terma scribe either wrote the terma in symbolic Dakini Script, or in Tibetan or Sanskrit. The symbolic script can only be read by the Terton. It usually just awakens the Terton's mind to the teaching. These writings are often done on yellow scrolls and put in caskets. The destined Terton is the only person who will discover it. A scripture can be concealed by Guru Rinpoche in various places, as in some cases, the casket would simply fall from the sky. Even though a terma might be written, its entirety is already within the mindstream of the Terton.

3) Pure Vision: these are not necessarily termas, since they do not require the mind to mind transmission from Guru Rinpoche. But these are pure teachings received from the vision of deities. These esoteric teachings are based on the tantras, and are sometimes called termas due to their merit.

The major termas collections contain Instructions on the Guru, Yidams and Dakinis (Rootor the Sources), the Branch instructions on the aspects and accomplishments of the siddhis and attainments (including other sacred objects and mantras), and the Heart teachings/practices of the Bodhisattva of Compassion, Dzogchen and the Guru Padmasambhava.

A terma is discovered only after

2) The Terton receives a prophecy to discover the terma

3) Preparatory rituals and purification are performed before the discovery

4) It is properly determined which consort and companions should be taken along, and whether or not the terma will be revaled in public.

5) It is determined how to propitiate the Terma Protector who must hand over the Terma, and what to replace once the terma is taken (sometimes the terma is returned and re-concealed)

A true Terma which is fully authentic might bring obstacles at first, but confer great benefit.

However, evil incarnations have attempted to produce false termas. They are soon known to be false since the terma's effects are not beneficial and not dharma.

Tertons are often incarnations of Guru Rinpoche’s disciples. They are realized and accomplished beings who appear due to the command of the Guru. They are not to be judged by their behavior, as Guru Rinpoche said, “The hidden enlightened beings appear in uncertain form, (while) the fool deceivers (false Tertons) are great hypocritical mimics of the dharma practitioner.”

Many Tertons take the afflictions of others unto themselves, and engage in all activities as the equal and nondual nature of enlightenment. Therefore, one’s egocentric expectations of a Terton do not constitute sound judgment. The Buddha said enlightened beings appear in all forms, from a Buddha, to a butcher and prostitute. Therefore, to judge an authentic Terton is a grave mistake.

Terton Ratna Lingpa (1403-1473) compiled the Kangyur and Tengyur, plus the Nyingma Tantras, which was organized originally by Longchen Ranjampa in the 14th century. Kathok and Gonchen Monastery, along with Terdak Lingpa and Lochen Dharmasri, also collected many of the tantras.

Jamgon Kongtrul Lodro Thaye complied and collected the lineages into the Rinchen Terdzo which composed over sixty volumes. This was kept at Palpung Monastery of the Tai Situ Rinpoche. Other masters such as Mipham Rinpoche, Patrul Rinpoche and Dodrupchen Rinpoche composed some of the most authoritive texts and explainations on the terma tradition.

The Nyingma Lineage has, of course, a monastic institution of monks, but also a strong tradition of lay practitioners. These lay practitioners use ordinary life, and transmute it into enlightened activity.

Monasteries of the Nyingmapa Lineage

Samye Monastery was built in 810 during the stay of Padmasambhava, it was consecrated by him. It wasn’t until centuries later that other great monasteries were built.

Kathog was founded in the twelfth century in central Tibet by Dampa Desheg. The inner tantras were closely followed, while in other parts of Tibet these teachings were very rare. In 1656 the monastery was restored and expanded. Until the communist invasion it housed over eight hundred monks. The lineage of Dudul Dorje and Lonsal Nyingpo is followed here. The Nyingthig Atiyoga teachings are a special practice of Kathog. Kathog Rinpoche is considered the present head of the monastery.

Dorje Drag monastery was founded in central Tibet, in 1659, by Rigzin Ngagi Wangpo. It preserved the northern treasures (termas). These teachings were revealed in the 14th century and later brought to Dorje Drag. The present head of the lineage is Taklung Tsetrul Rinpoche.

The Mindroling monastery was founded in central Tibet by Terdag Lingpa and his brother Lochen Dharmasri. It is renowned for intense study and practice, chanting, art and sacred dance. In Tibet, Mindroling was the most prestigious Nyingma institution and its abbot was highly respected. Its temple and grounds housed a three story high Padmasambhava statue and stupa for Terdak Lingpa. Its holder, the Mindroling Trichen, is considered the most esteemed position within the Nyingma school. He is the supreme holiness of the Nyingma lineage.

Palyul monastery founded in eastern Tibet in 1665 by Rigdzin Kunzang Sherab, preserving teachings of Ratna Lingpa. Tarthang Monastery was a satellite monastery of Palyul. Pema Norbu is the present abbot of Palyul.

Dzogchen monastery founded in eastern Tibet in 1685 by Pema Rigdzin. Nyima Ragpa’s termas were preserved as well as kama (oral) teachings. It housed well over 800 monks. Dzogchen Rinpoche and Dzogchen Ponlop Rinpoche are its main Lamas.

Shechen Monastery was founded in Eastern Tibet in 1735 by Gyurmey Kunzang Namgyal, the brother of the 2nd Shechen Rabjam. It was modeled in the Mindroling and Dzogchen practices and held a strict monastic discipline, housing over two hundred monks.

Most of the Nyingma institutions which were described above have been re-established in India and Nepal, and more recently the ancient temples in Tibet are being rebuilt. Among some other highly esteemed masters of the lineage are Trulshik Rinpoche, Dodrupchen Rinpoche, Khenpo Phunstok, Namhka Drime Rinpoche and others.